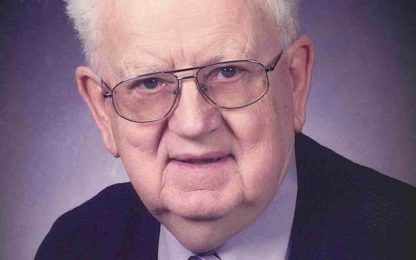 Visitation will be on Saturday, January 25, from 1:00 pm to 2:00 pm at the United Methodist Church in Lamberton.

A Celebration of Life will be held at the United Methodist Church on Saturday, January 25, at 2:00 pm.

The clergy will be Pastor Kirk Doering and Chaplain Noel Wetter. A private burial will be at the Lamberton Cemetery.

Wayne “Bob” Robert Krinke was born on September 12, 1924, the son of John and Ella (Werner) Krinke, north of Lamberton, MN. After graduating from Lamberton with the class of 1942, Bob attended Mankato Commercial College graduating in March of 1945. On November 3, 1945, Bob was united in marriage to Helen Olson at the United Methodist Church in Lamberton. The couple moved to St. Paul where he worked for the St. Paul Airport and later Firestone. In 1946, Bob and Helen moved to Lamberton where he worked and later owned the hardware store, retiring after 60 years in business. Bob was greatly involved and proud of the community of Lamberton serving on the boards of the Lamberton School, Valley View Manor, and Douglas Apartments. He also was a member of the Lion’s Club, Mason’s, Lamberton Commercial Club, Lamberton Industries, and Prairie Land Economic Development. Bob also helped out with various projects in the community including Kuhar Park, the swimming pool, and many main street projects. A member of the United Methodist Church, he sang and led the choir, and served on many other church organizations and boards. Bob also sang with the Southwest Men’s Chorus and the Windom Chordhustlers. He enjoyed gardening, watching the Twins and Vikings, and a good pie and ice cream. After many years in Lamberton, Bob went to live in Springfield at the Maple’s at the St. John Circle of Care.

He is survived by his children – Thomas (Susan) Krinke of Ham Lake, Steve (Patricia) Krinke of Winona, and Debbie (Tim) Nelson of Pella, IA; 6 grandchildren; and 11 great grandchildren. Bob was preceded in death by his parents; wife Helen in 2004; brothers – Darold, Ken, Don, and Merle; and sisters – Millie, Ruth, and Betty.