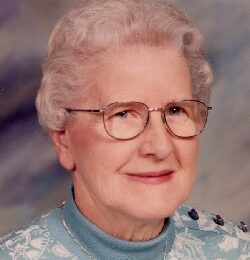 Vivian Lightfoot, age 96, of Hector, MN, died on Friday, December 31, 2021 at the Olivia Healthcare Center. A memorial service will be on Thursday, January 13th, 2022 at 11:00 a.m. at Dirks-Blem Funeral Home in Olivia with Pastor Krey Leesman officiating. Burial will be in the St. Aloysius Cemetery in Olivia. Visitation will be one hour prior to the service at the funeral home.

Vivian Marie Lightfoot was born in Redwood Falls, MN to F. Dale and Alice (Wilcox) Lightfoot. The family moved to Olivia where she attended the Olivia School. After graduating from high school she took the one year training for teachers at Glencoe. The rest of her college education was secured at night classes and summer school. In 1950 Vivian earned the two year degree and in 1959 she finally received the Bachelor of Science degree from St. Cloud State where she was a member of Delta Kappa Gamma. She had taken additional courses from Mankato State, Bemidji State and Western Washington in Bellingham, WA. Vivian began her teaching with seven years in the rural schools of Renville County. The largest enrollment was 23 with grades 1-6. By 1950, the rural schools were being closed so Vivian went to Buffalo Lake where she had 39 third graders. The second year she taught in a town hall a block from the main building. During that year several days were spent with the class on bleachers in the gym because the town hall couldn’t be heated above 60 degrees. The third year in Buffalo Lake was as a teacher of half the fifth grade in a two room rural school several miles north of town. Then Vivian taught one year in Dawson, MN before going to Hutchinson in 1955 to teach third grade. When the high school moved in 1961 she began teaching elementary P.E. She taught second graders the last seven years of her career, retiring in 1988. She moved to Las Vegas a few years later and moved back to Minnesota in 2019. In addition to teaching, Vivian enjoyed working with children as a Sunday school teacher, Girl Scout Leader, counselor at both Bible Camp and Girl Scout camp. After 44 years of teaching, she was ready to try her hand at a few of the things she had not had the time to do at any length. Vivian’s hobbies were knitting lap robes for nursing homes, reading mysteries by Lillian Jackson Braun, and crossword puzzles. She also liked playing cards, bingo, and dominoes. For several years, Bev and Vivian had a 19 foot motor home. They enjoyed traveling and visiting many campgrounds throughout the summer months. Vivian will be remembered for being a life-long teacher and loving aunt to her family.