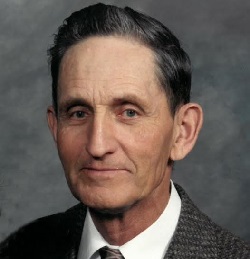 The funeral service for Vernon Jaeger, 92, of Redwood Falls, will be held Wednesday, October 20, 2021, at 11:00 a.m. at Our Savior’s Lutheran Church in Lamberton. Visitation will be two hours prior to the service, 9:00 until 11:00 a.m., at the church. Interment with military honors will follow the service at St. Matthew Lutheran Cemetery in rural Wabasso.

Vernon Carl Jaeger was born April 7, 1929, at his home in Lamberton Township to Otto and Louise (Raduenz) Jaeger.  He was baptized and confirmed at St. Matthew Lutheran Church.  He attended country school in Lamberton township and graduated from Lamberton High school in 1947.  He farmed in Lamberton Township until he was drafted into the United States Army in 1956.  He was stationed in Orleans, France for 1 year during the Korean War.  He returned to his farm following the war in 1957.

Vernon was united in marriage to JoAnn Saxton on May 31, 1954, at the Methodist church in Tracy, MN.  They had four children: Patricia, Steven, Sandra, and David.  Vernon worked as a farmer until his retirement.  Recently, they moved to Redwood Falls and have resided there for the past 6 years.  Hunting, trapping, fishing, and bowling were favorite hobbies of Vernon’s, and he enjoyed sharing them with his children and grandchildren.  Vernon was an active follower of God and member of Our Savior’s Lutheran church where he served on the church council.  He was also a member of the Andrew Peterson American Legion Post #41 and served on the honor guard.  Vernon passed away at Valley View Manor nursing home in Lamberton, MN, on October 16, 2021.