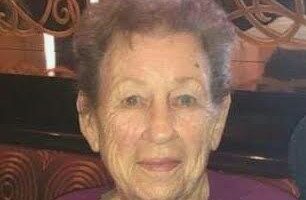 Vera Mae (Greenbush) Anderson age 94 of Tracy passed away Monday, October 10, 2022 at Prairie View Health Care Center in Tracy.  Memorial Services will be at 2:00 p.m. Friday, November 4th at the Tracy Area Funeral Home.  Visitation will be held one hour prior to services.  A PRIVATE FAMILY Burial will be held at the Calvary Catholic Cemetery in Tracy.  Online condolences may be sent at www.stephensfuneralservice.com.  Stephens Funeral Service – Tracy Area Funeral Home is assisting the family with arrangements.

Vera was born December 19, 1927 at home in Sodus Township to Frank and Bernice (Hagenson) Greenbush. When she was three years old the family moved to a farm north of Amiret. She attended the Amiret School through the 8th grade, and then transferred to Tracy High School, graduating in 1945. The highlight of her teen years was being the health delegate for 4-H and winning a trip to the State Fair in 1943, representing the Amiret Busy Bees of Lyon County. She married Kenneth Anderson in 1946 in Tracy and to this union seven children were born. They made their home in Walnut Grove where Vera was a homemaker and also an active Den Mother, Girl Scout Leader, member of PTA, and taught religion classes at St. Paul’s Catholic Church. The family moved to Tracy in 1965 where she continued to teach classes at St. Mary’s Church. She went to work in 1967 as bookkeeper at Ken’s Super Valu, then at John’s Super Valu, retiring in 1997. After that Vera did volunteer work in various stores in Tracy. Vera was a member of St. Mary’s Church, past member of Tracy Country Club, honorary member of Garden Gate Flower Club, as well as past chairperson of the Multi-purpose Center. Vera was a great crocheter and knitter, with her family and friends enjoying the gifts of her labor. Vera enjoyed playing cards in her “spare time” (many times over bidding) and was a member of many card clubs. She loved to travel and visited over 30 states, Europe (especially the Berlin Wall), England, Mexico, Canada and Jamaica. In 1988, after not having the family all together at the same time in 22 years, Vera planned a Christmas in July Celebration complete with tree, carols, gifts and even Santa Claus (Con Rettmer). What a fun memory! Vera’s children, grandchildren and great grandchildren were her greatest treasures. She was a very religious person although she kept that quite private. But she always told her kids that her God was a loving God.

Vera is survived by three daughters: Shirley of Tracy, Judy (Larry) Herdina of Winona and Penny of Burnsville; two sons: Jerry (Jean) of Shiloh, IL, and David (Sherri) of Tracy; 13 grandchildren, 22 great grandchildren, three children who adopted her as “Grandma” and three adopted great grandchildren; brother Tom (Marcia) of Corcoran; and many nieces and nephews and cousins. She was preceded in death by her parents, her husband in 2002, son Dany in 2002, son Ken (Christine) in 2021, one brother in 1944, one brother in July 2001, and one sister in August 2001. Those years – 2001 and 2002 – were very traumatic times where her faith held her up.

Blessed be her soul.

Life is not a journey to the grave with the intention of arriving safely in a pretty and well-preserved body, but rather to skid in broadside, thoroughly used up, totally worn out and proclaiming, “WOW! What a ride!”