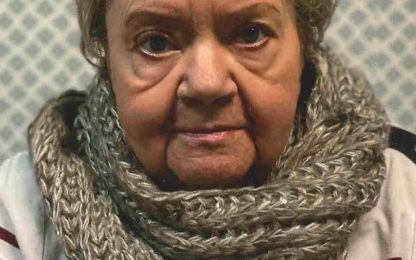 The clergy will be Father Mark Steffl. Interment will be at the Calvary Catholic Cemetery in Walnut Grove, MN.

Twilia “Terri” Hartung was born May 5, 1939 to Hildegard (Frentz) and Walter Klatt in Watertown, South Dakota. They relocated when she was a child to western Wisconsin. She was united in marriage to Robert Goettl, and the two welcomed two daughters. Terri enjoyed living in Stuttgart, Germany for a few years when Robert was stationed there in the U.S. Army. Terri became a Licensed Practical Nurse, practicing in an array of areas in the nursing field. She was later married to Carl Hartung. The couple traveled the country living in various states. They drove semi together, taking turns resting and driving. In the 1980’s they owned and managed various businesses including the Grove Apartments in Walnut Grove, and the motel in Tracy, MN. She continued to practice in the nursing field in the Tracy, MN area until retiring in the late 1990’s. She enjoyed sewing, gardening, baking, dancing to polka, doing crafts, putting together puzzles, and listening to country music. You could always find her playing cards or board games with loved ones. Just to know Terri was to love her. She had what could only be described as an “epic” personality. She was the perfect blend of grace and dignity when necessary, yet a cut loose jokester to those who had the fortune of being close to her. Her wit was impeccable, and you never knew what she would come up with next. She was one of the most nurturing and giving humans around, yet a strong, fierce disciplinarian to her children and grandchildren when warranted. She was cherished by her granddaughters serving as their shoulder to cry on, confidant, and source of wisdom. She spoiled them with gifts, treats and love. Terri recently spent several years in nursing facilities. The staff that cared for her were dear to her heart. Family invites staff to join celebrating her life, sharing stories, and for the opportunity to thank you for your dedication to her.