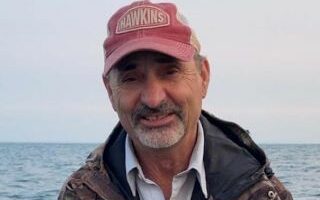 A Mass of Christian Burial will be held at the St. Joseph’s Catholic Church on Thursday at 11:00 am.

The clergy will be Father Garrett Ahlers.

Thomas Omer Jenniges was born on April 30, 1953, to Omer and Alice (Kaufenberg) Jenniges in Springfield, MN. After graduating from high school in Lamberton in 1971, Tom attended Pipestone VoTech for meat cutting. On August 6, 1977, he was united in marriage to Marlys Pingeon in Lamberton. The couple raised 2 children – Jessica and Spencer who are 17 years apart. He loved going to Jessica’s basketball games and Spencer’s wrestling matches. Tom helped coach youth wrestling for 4 years. Tom’s favorite times were with his family and especially enjoying a good meal with them. He served on the Waterbury Township board for 16 years, was an election judge, and was an active member of the Sons of American Legion for 26 years and served in the honor guard. Tom was a lifelong member of St. Mathias Catholic Church and became a member of St. Joseph’s Catholic Church after St. Mathias’ closing. He liked walking the corn and bean fields and the smell of the corn when it was maturing. Not only did he like growing crops, he liked to garden and have fresh vegetables. He enjoyed the farm animals and a good farm dog that would be close by as he walked or rode bike down the road. Tom traveled many times to Canada and Lake of the Woods to go fishing. As a family they traveled to the Black Hills, a Caribbean cruise, Hawaii, and Duluth. 50’s and 60’s Chevys were his fondness. For 20 years Tom played softball and enjoyed the socializing after and having an ice cold beer. Farming was truly his lifelong passion and was in his blood. He farmed most of his life with his dad and brother Kevin. During the last year, Tom worked with his son Spencer to take over his part of the farm which was no small task. The couple farmed near Lamberton for most of their marriage. When Omer retired, they moved to the family farm where they reside today.
Tom died on December 30, 2022, at home surrounded by Marlys, Jessica and Spencer following an 9-month battle with cancer.
He is survived by his wife Marlys of 45 years, daughter Jessica (Chad) Hastings of Montrose, son Spencer Jenniges of Lamberton, brothers – Kevin (Lisa) Jenniges of Walnut Grove and Bob (Deb) Jenniges of Revere; sisters Rozi Rose of Bloomington, Monica (Chris) Blegen of Pemberton, Mary (Todd) Evans of Lamberton, Wendy (Tom) Haley of Lake City; 2 grandsons – Josh (Emily) Hastings and Ethan Hastings and 1 granddaughter Isabella Hastings; many nieces, nephews, great nieces and nephews and many close friends. Tom was greatly loved by his family and all that knew him. Greeting him with open arms in heaven are his parents Omer and Alice Jenniges, brother Rod, sister-in-law Elaine Beerman, parents-in-law Donald and Violet Pingeon, and other family and friends he has lost along the way.