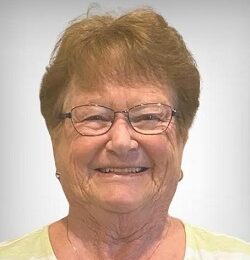 Theresa Rose Kerkhoff age 76 of Redwood Falls, formerly of Morgan, passed away unexpectedly on Saturday, November 20, 2021 at her home.  Mass of Christian Burial will be held at 10:00 am Saturday, November 27, 2021 at St. Catherine’s Catholic Church in Redwood Falls.  Visitation will be held from 4:00 – 7:00 p.m. Friday with a Prayer Service at 7:00 pm at Redwood Valley Funeral Home and will continue one hour prior to the service at church on Saturday.  Interment is in St. Michael’s Catholic Cemetery in Morgan.  Online condolences may be sent at www.stephensfuneralservice.com. Stephens Funeral Service – Redwood Valley Funeral Home is assisting the family with arrangements.

Theresa was born October 10, 1945 in Redwood Falls, MN to Norbert & Lorraine (Bernardy) Frericks.  She was baptized and confirmed in the Catholic faith.  Theresa graduated from Wabasso High School in 1964.  On August 7, 1965, she was united in marriage to Dave Kerkhoff at Our Lady of Victory Catholic Church in Lucan.  They started their married life near Clements, before moving to their farm near Morgan, where they lived for over 30 years.  Theresa stayed at home to raise their children and helped with the farm operation until the kids graduated. She then worked at Cedar Mountain High School and later was employed at Brix Drug Store, Ron’s Hallmark, and Treonne’s Clothing in Redwood Falls.  In 2005, they moved to Redwood Falls, where they have resided since.  Theresa enjoyed summers at their seasonal camper in Sauk Centre and in recent years, she has enjoyed wintering with Dave in Arizona. For several years she enjoyed serving lunch at the Kerkhoff Auction Center where she was well known for her Special K and banana bars.  She was an active member at St. Michael’s Catholic Church in Morgan and later at St. Catherine’s Catholic Church in Redwood Falls, where she was involved on the CCW.  Theresa served on the Redwood Area Hospital Operating Committee, and was a volunteer for Hospice and Carris Health.  She and Dave enjoyed playing cards with their neighbors and in retirement she played Bridge with several friend groups.  Theresa enjoyed feeding and watching birds, collecting Precious Moments, was a talented seamstress, and did embroidery for a number of years.  More than anything, however, Theresa was very present in her children and grandchildren’s lives.  She attended countless events, and had a special relationship with each person in her family.  She was selfless, and enjoyed cooking and baking everyone’s favorite foods for special occasions.  She cherished 33 years of celebrating Thanksgiving weekend at a hotel with the entire family being together.