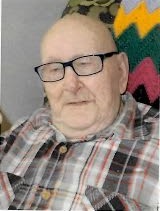 Sidney Albert Ulven was born on April 20, 1924, in Grover, South Dakota to Andrew and Laura (Anderson) Ulven.  He attended school in Grover and finished country school in Henry, South Dakota.  Following his schooling, he farmed with his parents for 10 years. He was married to Lois Rimel in 1945, and they later divorced.  Sid worked for 27 years at the stone quarry south of Sacred Heart.  He then worked for Minnesota Feed Distributors for 2 years, and for 5 years at sugar beet plant in Renville.  He also worked many odd jobs throughout his life.  Sid was a member of Rock Valley Lutheran Church and he enjoyed his hobby farm, raising cattle and hogs.

He is survived by his two sons:  Ronald (and Dolly) Ulven and Stevie Ulven both of Minneapolis; his three daughters:  Dixie Johnson of Granite Falls, Patricia McMannis of Granite Falls, MN, and Kim (and Butch) Castner of Minneapolis; his sister Verneda Wolff of Aberdeen, SD; 8 grandchildren and 11 grandchildren, and 4 great-great grandchildren.  He was preceded in death by his parents, his son Richard, his daughter-in-law Susan, and his siblings: Eldon, Lyle, Roy, Helen, Idella, Agnes, and Evelyn.