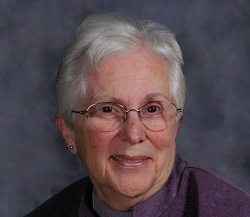 Shirley Fay Gladitsch, age 89 of Vesta, passed away Sunday, June 26, 2022 at her home.  Memorial Services will be held at 2:00 p.m. Tuesday, July 5, 2022 at St. John’s Lutheran Church in Vesta.  Visitation will be one hour prior to the service at church on Tuesday.  Interment will be in the Vesta Cemetery.  In lieu of flowers, memorials are preferred.  Online condolences may be sent at www.stephensfuneralservice.com. Stephens Funeral Service – Redwood Valley Funeral Home is assisting the family with arrangements.

Shirley Fay (Gollmer) Gladitsch was born April 12, 1933 to Albert and Elsie (Steinhouse) Gollmer in Norfolk Township, Renville County, Minnesota.  She was baptized in the Lutheran faith in Morton and confirmed at St. John’s Lutheran Church in Vesta.  Shirley attended District 82 Country School and later graduated from Echo High School in 1951.  Following high school Shirley worked at Universal CIT in St. Paul as a bookkeeper.  After her mother’s passing, she returned to Vesta to help care for her younger siblings and worked at the creamery in Vesta.  On February 23, 1957, she was united in marriage to Miles Gladitsch at St. John’s Lutheran Church.  The couple lived in the Vesta area on the Gladitsch family farm, where they raised their two children, Jo and Lee.  After Lee began school, Shirley furthered her own education and earned her teaching degree.  She accepted a position as a Special Education teacher in Wabasso for 18 years.  As a member of St. John’s Lutheran Church, she was involved in Ladies Aide and taught Sunday school.  In 1996, Shirley and Miles began working for Builders for Christ helping to build churches. Their first location was Antigua and they served until 2006. Shirley belonged to the Red Hat Granny Readers for numerous years.  To pass the time, she loved reading, sewing and traveling with Miles.