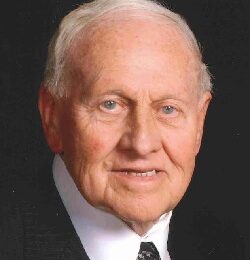 Service will be held at the Trinity Lutheran Church on Saturday at 2:00 pm.

The clergy will be Pastor Tim Mason. Interment will be at the Springfield City Cemetery.

Ronald Allen Kleven was born November 10, 1935 to Selmer and Signe (Wenskaug) Kleven at the family farm in Chippewa County, Milan, Minnesota. He was baptized December 6, 1935 and confirmed in the Lutheran faith on January 23, 1949. Ron attended Milan Public School, graduating in 1953. After high school he attended Concordia College, Moorhead, MN and graduated in 1957 with degrees in political science and social studies, and physical education. His first teaching and coaching job was in Wanamingo where he met Phyllis Orsten. They were married on August 17, 1958. Three daughters were born to the Klevens. In 1960 they moved to Ortonville where Ron taught history and coached basketball, baseball, and football and taught tennis as part of the summer recreation program. After eight years in Ortonville Ron was appointed Jr. High Principal, giving up teaching and coaching. Ron earned his bachelor’s degree in education administration from South Dakota State University in Brookings, SD and his specialist degree from St. Cloud State University. Ron served as Superintendent of Schools in Clarkfield from 1975 to 1989 and in Springfield from 1989 until he retired in 1996. He was a member of MASA, a participant in the Bush Fellowship Program and served on the Minnesota State High School League Board of Directors and held offices at the local and regional level. After retiring he served as interim superintendent in Pipestone, Ortonville, and Olivia-Bird Island, completing 41 years of service to education in Minnesota.

Always interested in sports, Ron played basketball and baseball at Concordia. He also played town team baseball for Appleton, Wanamingo, Kenyon, and Ortonville, and town team basketball while in Wanamingo and Ortonville. While in Clarkfield he found time to once again play golf and participated in the men’s league there and in Springfield. In every community he lived in, Ron took time to go downtown for morning coffee to connect with community members. He was active in his community and church, serving on many boards and holding many offices of leadership. After retiring in Springfield, Ron loved spending time at his lake home on Lake Florida near Spicer. His greatest joy was his family and he especially loved following the activities of his grandchildren and great grandchildren.

Ron is survived by his wife Phyllis of Springfield; daughters – Tamara (Ronald) Jessen of Apple Valley, Rebecca (Paul) Donner of Lakeville, and Beth (Daniel) Collins of Elk River; 9 grandchildren and 9 great grandchildren; sisters-in-law Barbara Meyer and Gloria Kleven. Ron was preceded in death by his parents and brothers – Lloyd, Vernon, and Kenneth Kleven.