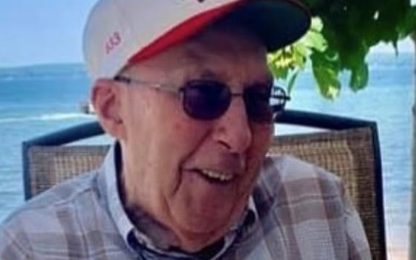 Roger L. Peterson, age 89, of Renville, died Saturday, August 28, 2021, at the RenVilla Nursing Home in Renville.  A memorial service will be held on Wednesday, September 1, 2021, at 11:00 a.m. at First Lutheran Church in Renville.  The Rev. Dan Bowman will officiate.  Visitation will be held on Tuesday from 5-7 p.m. and will continue on Wednesday one hour prior to the services at the church in Renville.  Arrangements are with Dirks-Blem Funeral Services, Renville, MN.

Roger L. Peterson was born on November 16, 1931, in Renville, Minnesota to Peter and Clara (Docken) Peterson.  He grew up in Renville and graduated from Renville High School in 1949.  Roger was united in marriage to Gloria Anderson on April 16, 1950, at First Lutheran Church in Renville.  They made their home in Renville and Roger and his brother owned and operated a dray line business.  Roger later worked as a delivery route driver for Oak Grove Dairy for many years.  He also worked as a custodian for over ten years, and as a bus driver for over 50 years at Renville Public School.  Roger loved the outdoors, hunting and fishing, and spending time at the river bottom.  He also loved spending time at Green Lake, where he taught many kids how to water ski.

Survivors include his daughter and son:  Brenda (and Len) DeGree of Renville, Brad (and Nancy) Peterson of Lexington, MO; his grandchildren:  Kelly DeGree, Andrew (and Michelle) Peterson, and Jacquelyn (and David) MacLean; his great grandchildren:  Adalyn MacLean, Oaks MacLean, Carter Peterson, and Hudson Peterson; and many nieces, nephews, and other relatives and friends.  He was preceded in death by his parents, his wife Gloria, and his brothers: Clarence, Harold, and LeRoy.