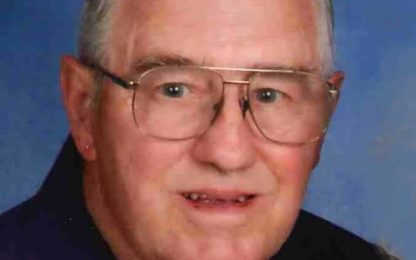 Funeral Service will be held at the Faith United Methodist Church in Sleepy Eye on Saturday, February 29, 2020 at 10:30 am.

Roger is survived by his wife of 54 years, Marsha (Haber) Marti of Sleepy Eye, MN; daughters Cheryl Marti of Green Bay, WI and Jill (Brian) Nelson of Sleepy Eye; sons Loren (Cammie) Marti of Green Cove Springs, FL and Dr. Nathan (Dr. Jessica) Marti of Courtland, MN; six grandchildren: Isaac and Joshua Nelson, Anastasia and Victoria Marti, Elenora and Alexander Marti; brothers James (Marcia Jo) Marti, Floyd (Brenda) Marti and sister Shirley (Charles) Cuykendall. Roger is preceded in death by his parents, Oliver and Verla (Schultz) Marti.
Roger was born on September 8, 1937 in Sleepy Eye, MN to Oliver F. and Verla R. (Schultz) Marti. He attended country school through 8th grade, and was at both the top of the class and bottom of the class. He graduated from Sleepy Eye High School in 1955 and attended the University of Minnesota for agriculture. He served in the National Guard as a squad leader and finally a sergeant of the 81st mortar. He married Marsha Haber on September 11, 1965 at St. Paul’s Lutheran Church in New Ulm, MN.
Roger had three loves – his faith, family and farming. Roger farmed with his dad and brother Floyd as Oliver Marti and Sons, then later Marti Holsteins. He “officially” retired in 2002… but a farmer never really retires. His love for farming carried into the next generation as well, with his daughter and son-in-law, Jill and Brian, carrying on the farming traditions under the current name Olmar Farms. His children, Cheryl and Nathan, are also involved in the dairy industry. Roger’s greatest honors were being inducted into the Minnesota Livestock Breeders Hall of Fame in 2000 and the farm being selected as the National Holstein Elite Breeder Award Winner in 2017.
Roger shared his passion of agriculture and church by being active in numerous organizations. He was active in 4-H, FFA and Junior Holstein Association as a youth, receiving such honors as National 4-H Congress Dairy winner and being the 1st recipient of an American Farmer (FFA) degree from Sleepy Eye High School. He continued as a 4-H leader and member of the Brown County, Minnesota State, and National Holstein Associations. He was a member of Minnesota’s 1st DHIA board, serving 20 years, and attending as a delegate for many National DHIA meetings. In addition, Roger enjoyed participating and showing at numerous dairy and farm shows, including showing some All-American nominated animals and several state-winning cows, including his favorite cow, Dazzling Star, who was the Grand Champion cow at the 1993 MN State Fair. Roger also loved to help and watch his children and grandchildren show cattle, as well as watch them play sports, being part of church and school programs, and music and band recitals.
Roger was strong in his faith and mind, battling cancer four times as well as Parkinsons. He was involved in his church, serving as the chairman of the administrative board for many years at Faith United Methodist Church. He also looked forward to their neighborhood picnics.
Roger will be remembered for his strength, perseverance, and competitive spirit, striking up a conversation with anyone anywhere, making friends around the world, and sharing his passion for his cows, family, and faith. He will be missed, but never forgotten.