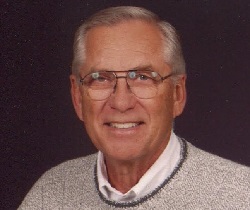 Rod Black, age 87, of Danube, MN died peacefully surrounded by his family on Wednesday, January 12, 2022 at his home in Danube.  Funeral Services will be Monday, January 24th, 2022 at 10:30 a.m. at Zion United Methodist Church in Danube with Pastor Arthur Miller officiating.  Burial will be in the church cemetery.  Visitation will be Sunday, January 23rd, at the Danube School in the gymnasium from 2 to 5 p.m. with a time of sharing memories from 5 to 6 p.m. Visitation will continue for one hour prior to the funeral at the church on Monday. In lieu of flowers, Rod and the Family would recommend donations to the Danube Historical Society or Renville County Hospice, where he served for 20 years.  Arrangements by Dirks-Blem Funeral Service, Olivia, MN.

Rodney Black was born October 15, 1934, in his home in Danube to Ernest (“Ernie”) Carl and Ella Frances (Schroeder) Black.  Rod spent his entire life in Danube, MN, however, moved many times within Danube as Ernie would build new homes and move on to another house in town.  Uncertain to the number of moves within Danube, but as many as 13 were identified.  Ernie ran many businesses in Danube, but his favorite was running the Danube Produce.

Rodney graduated from High School in Danube, MN in 1952 and attended Westmar College in LeMars, IA.  While at Westmar, his junior year, Rodney met Mary Lee Thompson in the Student Union where her roommate asked Rod to sign her yearbook; Rod’s comment to Mary Lee was: “I suppose you want my autograph as well, what’s your name?”  They married August 3, 1957, in Washta, IA by WW Zahl and W Ray Thompson, Mary Lee’s father.   Upon graduation, Rod and Mary Lee returned to Danube where he taught and coached his entire career, 1956 to 1992. His passion was coaching, and it is “Coach” you will find on his tombstone.  Whether he coached you on the court, football or baseball field, the classroom or as a friend, Rod loved to coach and bring the best out of people.

Rod coached football, basketball and baseball in Danube and Renville County West (basketball) spanning from 1956 to 1992 in one sport or another, but his favorite sport was basketball where he coached from 1959 to 1979 and 1986 to 1992.  At the end of the 1991-92 school year Rod retired.  Rod coached three state basketball tournament teams (1960-61, 1961-62 and 1978-79) and was enshrined in the Minnesota Basketball Coaches Association Hall of Fame in 1988. Being retired did not change Rod’s routine as he was conditioned to be at a sporting event across all seasons and traveled to be sure he and Mary Lee could see all the grandchildren play their sports.  No distance was too far to see a game. Even after the grandkids were done with their playing days, he would still be at the football field on Friday night, and in the gym throughout the winter.  He was blessed with several friends who would volunteer to take him to the game. The other routine that never changed is coaching.  And to Rod, coaching did not stop at the entrance / exit to the gym; he coached wherever he was at the time.  His children were blessed to get the best of Rod, he never stopped providing life coaching to them, but they had the distinct pleasure of also calling him dad!  Until the day he left this earth, he was still coaching, all you had to do was observe his conversations with his friends and family.  Many of these conversations ended with the phrase ‘I love you’ and ‘thank you for being such a good friend’.Rodney and Mary Lee were the proud parents of Debra Lynn, Pamela Jo, Jay Thompson, and Jon David.Throughout Rod’s entire life, he was involved in ministry at Zion United Methodist Church serving as lay leader and other roles. Longtime member of Danube Lions Club, and Rod was also President of the Danube Historical Society and very active in preserving the history of his hometown.  There are very few facts he could not recite if you only asked.