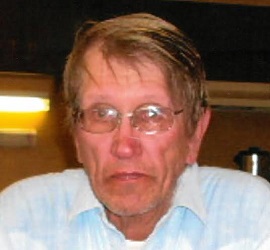 Robert W. Olson age 75 of Dovray passed away on Thursday, December 23, 2021 at the Westbrook Good Samaritan Care Center.  Funeral Services will be held at 10:30 a.m. Thursday, December 30, 2021 at Our Savior’s Lutheran Church in Dovray.  Visitation will be held one hour prior to services at the church on Thursday.  Interment is in Our Savior’s Lutheran Cemetery in Dovray.  Online condolences may be sent at www.stephensfuneralservice.com.  Stephens Funeral Service – Westbrook Funeral Home is assisting the family with arrangements.

Robert W. Olson was born October 14, 1946 in Slayton, MN to Frederick M. & Ellen V. (Finstad) Olson.  He was baptized and confirmed at Our Savior’s Lutheran Church in Dovray.  Robby graduated from Westbrook High School in 1964, and attended Alexandria Technical College for welding.  He worked at Brady & Toro in Windom in 1969-1970.  Next he worked in Mora for a while before working for Palm Industries in Litchfield in 1972.  Robby then moved home to help care for his parents until his father’s death in 1977.  After his mother entered the nursing home in 1982, Robby went to work for two area farmers and later worked part time for Meadowland Farmers Coop Elevators.  He lived Southwest of Dovray until his brother passed away.  Robert then moved to Westside Apartments in Slayton for a number of years until he entered the Westbrook Good Samaritan Care Center due to his health.  Robby enjoyed watching TV in his spare time.

Robert is survived by his brothers Everett (Jane) Olson of Sheboygan, WI and Alfred (Dixie) Olson of Lee’s Summit, MO, and many nieces, nephews, other relatives and friends.  He is preceded in death by his parents, sister Marlene Olson and brothers Myron and Lyle Olson.