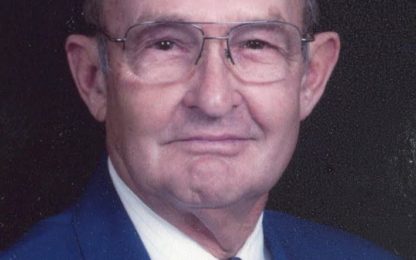 Robert “Bob” Ewer, age 87, of Olivia, died Thursday, January 16, at RC Hospital in Olivia.  Funeral services will be Tuesday, January 21st, at 11:00 a.m. at Zion Evangelical Lutheran Church in Olivia with Pastor Isaiah Horn officiating.  Burial with military rites will be in the Olivia Cemetery.  Visitation will be Monday, January 20th from 4-6 p.m. at Dirks-Blem Funeral Home in Olivia. Visitation will continue on Tuesday at the church for one hour prior to the service.

Robert Edward Ewer was born on July 12, 1932 to Claude and Marge (Forcier) Ewer in Bird Island, MN. Bob grew up in Bird Island and attended St. Mary’s School. He then worked for area farmers and helped on his parent’s hatchery and game farm. When his dad was injured and unable to do his maintenance work with steam engines, Bob and his twin brother, Walt, worked on the “steamers” often until midnight so the trains could continue on the following day. Bob served his country in the U.S. Army from 1951-1953. On April 24, 1954 Bob was united in marriage to Marlene Groff at Zion Evangelical Lutheran Church in Olivia. They made their home in Olivia and were blessed with two children. Bob worked for the Ford Garage in Olivia and then started working for the City of Olivia in the electric department. He was on the Olivia fire department for over 20 years and was an active member in the American Legion. After he retired from the city in 1991, he kept busy by driving school bus and inspecting soybeans for the state of Minnesota. Bob enjoyed hunting, fishing, and camping at the Kandiyohi County Parks and at Starbuck. Together, Bob and Marlene were members of Builders For Christ and OWLS at their church in Olivia. They were both very active members of the church even acting as janitors and doing the lawn care in earlier years. Bob was also a very dedicated usher. He sold RUPP snowmobiles and fixed them from “Bob’s Repair Shop” out of his garage. His whole family enjoyed riding their antique snowmobiles together. Bob will be remembered for his friendly personality and willingness to always help others.