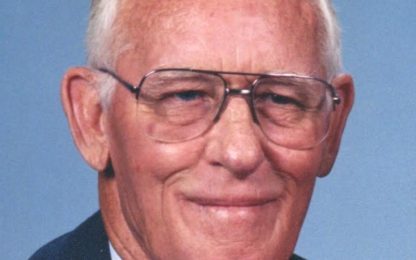 Robert “Bob” Bauman, age 93, of Olivia passed away peacefully on Thursday, June 3, 2021 at his home.  Mass of Christian burial will be Friday, July 2, 2021 at 11:00 a.m. at St. Aloysius Catholic Church in Olivia with Rev. Joe Steinbeisser as celebrant. Burial will follow in the church cemetery. Visitation is Friday from 9:30-11:00 a.m. at the church.  Arrangements are with Dirks-Blem Funeral Service of Olivia.

Robert James Bauman was born December 2, 1927 to Wolfgang and Josephine (Theilen) Bauman.  He grew up on a farm north of Hector and attended country school. He then worked building barns with his father. Bob served his country in the U.S. Army. Upon returning home he worked at the Ford Garage in Bird Island and then went into business with his brother Gene at the Mobil Station in Olivia.

Bob married Leona “Toots” Steffel on September 19, 1950 at St. Aloysius Catholic Church in Olivia. They made their home in Olivia and were blessed with one son Duane and one daughter Viann. In 1959 Bob went to work for the Trojan Seed Company in Olivia and rose to the position of General Plant Manager of all Trojan Plants. Then in 1977 along with five other fellow Trojan employees they started the Keltgen Seed Company, where he held the position of Vice-President of Production until retirement.  Bob had enjoyed hunting, fishing, golfing, and playing cards (to win!). He was very handy at woodworking, carpentry and building various things over the years.  He and Toots liked spending winters at their home in Fountain Hills, AZ. Bob had been a member of St. Aloysius Catholic Church, the American Legion, and the Olivia Golf Club.

Bob is survived by his son Duane (and Connie) Bauman of Olivia; his five grandchildren: Bobby, Jonathan, and Sean, Amanda and Jeremy; several great-grandchildren; sisters: Lois Schmidt of Winthrop, Vera Schmidt of Minneapolis, and Dorothy Zumbach of Hutchinson; his sister-in-law Lavonne Doubrava of Fergus Falls, Lucy Steffel of South St. Paul and Monica Steffel of Olivia; his brothers-in-law Larry (and Jean) Steffel of Olivia and Maurice Woelfel of Bird Island. Bob was preceded in death by his parents; his wife Toots; his daughter Viann (and Paul) Haug; brothers: Norbert, James, Eugene, Greg, and Richard; sister Eileen Woelfel; and brothers-in-law: Eldon Steffel and Gordon Steffel.