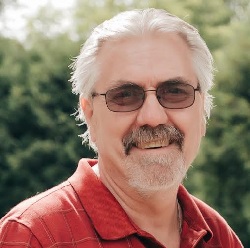 Ricky Lingl, age 59 of Moorhead, MN died on April 5, 2022 at his home. Mass of Christian Burial will be Tuesday, April 12, 2022 at 1:15 p.m. at St. Mary’s Catholic Church in Bird Island with Father George Schmit as celebrant. Burial will be at a later date at St. Mary’s Cemetery. Visitation will be Monday, April 11, 2022 from 5 to 7 p.m. at Dirks-Blem Funeral Home in Olivia with a prayer service at 7 p.m.  Visitation will continue on Tuesday from 11 a.m. to 1:15 p.m. at the church. Arrangements are by Dirks-Blem Funeral Service of Olivia.

A live stream of Ricky’s service will be available at the following link: https://my.gather.app/remember/ricky-lingl

Ricky Alan Lingl was born on September 11, 1962 in Redwood Falls, MN to Francis “Punkin” and Ruth Ann (Goblirsch) Lingl. He grew up in Bird Island and graduated from Bird Island-Lake Lillian High School in 1981. He served his country in the Marine Corps from 1982 to 1986. Throughout his time as a marine, he enjoyed training with the Korean Army and did three tours in Okinawa. Ricky was a cashier for seven years in Fargo and managed a convenience store for 23 years in St. Cloud.  Ricky was united in marriage to Rose Jackels on July 16, 1988. Spending time with his family, especially his nieces and nephews brought him much joy. The Broncos and Tar Heels were his favorite sports teams to follow. He preferred to listen to Joan Jett and AC/DC above any other musicians. Ricky liked going bowling, playing softball, and geocaching in his spare time. He had a special place in his heart for cats and dogs. Ricky will be remembered for his friendly smile and social personality.