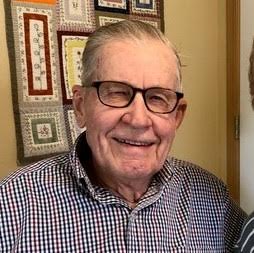 Dick was born on October 30, 1932, on the farmstead south of Sacred Heart to John and Ella (Engler) Hoff.  He was the grandson of Norwegian immigrants Oluf Christopher and Olea (Knutson) Hoff, and German immigrants Herman W. and Emilie (Haak) Engler. Dick was baptized and confirmed in the Lutheran faith.  He started his education in a country school and graduated from Sacred Heart High School in 1950. Richard graduated from Luther College, Decorah, Iowa in 1954 with a Bachelor of Arts Degree in Business Administration. He served his country in the United States Army from 1954 to 1956 in Germany.

Dick met Nancy McGillivray at Hennepin Avenue Methodist Church in Minneapolis.  After an eight month whirlwind romance, they were married October 17, 1959, at the First Presbyterian Church in LeRoy, Minnesota.  They have two children, David and Karen.

Dick was employed by Archer Daniels Midland Company in Minneapolis.  In 1961, he was transferred to Pekin, Illinois where he was Plant Accountant and Office Manager at a large chemical plant.  While there, Dick was involved in many community activities.  He was a member of the Board of Directors of the Peoria Chapter of the National Association of Accountants.  He served on the church council and was treasurer of his church.  He was a Team Captain in the Salvation Army Fund Drive, Key Man in the United Fund Drive, and a member of the Jaycees.  Richard was invited by many organizations to give speeches on the Archer Daniels Midland Company.  He was nominated for the Outstanding Young Man Award and listed in the 1966 National Edition of Outstanding Young Men of America.

In 1968, Dick accepted a position with Clinton Corn Processing Company located in Clinton, Iowa where he was a Budget Analyst, Program and Systems Analyst.  After retiring in 1982, at the age of 50, he started his own company Dick Hoff Typing and Word Processing.  He operated the company for thirteen years and sold it in 1995.  The company still exists today.  While in Clinton, Iowa, Richard was an active member of the Chamber of Commerce and the Cornbelt Running Club serving as Race Director of several races.

In 1995, Dick and Nancy moved back to Sacred Heart, Minnesota.  He was an active member of many groups including Our Savior’s Lutheran Church, the Sacred Heart Lions Club, and the Museum.  He also served on the church council, coordinated cemetery maintenance; was a past President of the Lions Club; and was on the Board of Directors and Treasurer of the museum for 15 years. Dick was very generous to those in need.

Dick enjoyed growing pumpkins for the fall season when he would invite the neighborhood children over to pick out a pumpkin and one for their teacher.  On Halloween, he enjoyed dressing up for the kids when they came trick or treating.  Dick loved traveling, reading, spending time with his daughter in Wisconsin, attending sports events of his grandchildren, and watching college and professional football and basketball. While in Clinton, he was an avid runner, competing in five marathons and many half marathons, and 5K up to 10 mile races.

Survivors include his wife Nancy of Sacred Heart, his children: David (and Margaret) of Sacred Heart, and Karen (and Jack) Drankoff of Appleton, WI; his grandchildren: Mary Hoff, John Hoff, Katelyn Drankoff, and Lauren Drankoff; his sister Judy Schultz, and his nieces and nephews:  Kara Byington, Robert McGillivray, James McGillivray, Lisa Goodwin, and Kathy McGillivray.  He was preceded in death by his parents.