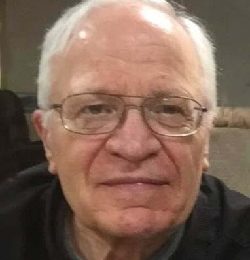 Service will be held at the St. Raphael Catholic Church on Friday at 1:00 pm.

The clergy will be Father Garrett Ahlers. Interment will be at the Calvary Cemetery in Mankato, MN.

Richard (Dick) Allen Duea was born January 9, 1945, in Willmar, MN to Willard and Dorothy (Warner) Duea. Dick spent his childhood in Willmar, Springfield, and Mankato. He graduated from Mankato Loyola High School in 1962 where he played football, basketball, and baseball. He worked a variety of positions in grocery, including 23 years with Red Owl, and food service. Dick also owned and managed several real estate properties in Minneapolis and St Paul. He enjoyed all sports, playing, coaching, and officiating baseball, hockey, and football youth and high school sports for many years, especially at Academy of Holy Angels in Richfield. Dick had season tickets for Minnesota North Stars and Vikings, and could give you stats of most baseball players, at all levels, including town teams across Minnesota. He moved to Springfield in 2005 to retire and was often seen riding a 3 wheel bike around town. Dick suffered a serious fall in 2014 and became a resident at St. John Lutheran Home that year. He was an avid newspaper reader and crossword fan. Dick enjoyed lifelong friendships with former classmates and teammates, family gatherings, and travel to visit cousins in Montana.
He is survived by his sister and brother-in-law, Donna and Glenn Schmitz, Sleepy Eye; seven nieces and nephews and their families; and cousins and friends. Dick was preceded in death by parents, Willard and Dorothy Duea of Mankato.
Special gratitude to all who helped Dick in many ways, especially Mark & Bev Clennon, all the wonderful staff and volunteers at St John Lutheran Home, and Carris Hospice nurses.