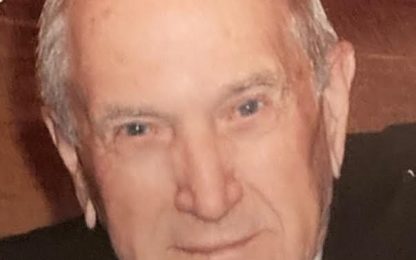 Ray Ferguson, age 99, of Danube, died Friday, July 23, at RenVilla Nursing Home in Renville. A memorial service will be held Wednesday, July 28, which would have been Ray’s 100th birthday, at 1:00 p.m. at St. Matthews Lutheran Church in Danube with Rev. Michael Kuschel officiating. Burial is in St. Matthew’s South Cemetery. Visitation is Tuesday, July 27, from 5 to 7 p.m. at Dirks-Blem Funeral Home in Olivia, with a prayer service at 6:45 p.m. Visitation will continue on Wednesday for one hour prior to the service at the church.

Ray Charles Ferguson was born July 28, 1921 in Olivia MN to Lester B. and Sophronia (Klemenhagen) Ferguson. Ray, losing his father at a very young age, learned the meaning of hard work and helping others. He started his school years in a country school south of Olivia and graduated from Olivia High School in 1939. Ray joined the US Army and served from 1942-1945. He served in France, Germany and North Africa. He was involved in the Invasion of Normandy on Omaha Beach and the Battle of the Bulge. He always had very interesting stories to tell about World War II and was a very proud Veteran. Ray was married to Mary Thoenebe on June 26, 1949. They settled in Danube and raised their 4 children. He worked for Griffith Construction for 35 years and in the winter months did many remodeling projects for people in the area.

Ray is survived by his four children: David (and Trude) Ferguson of Corpus Christi, TX, Pat Dillon of Olivia, Rick(Tammy) Ferguson of Danube and Robert (Joy) Ferguson of Olivia; his 10 grandchildren and 21 great-grandchildren; sister Dorothy Prax of Fairfax, MN; and sister-in-law Delores Miller of Chaska, MN. Ray was preceded in death by his parents; his loving wife, Mary; son-in-law Michael Dillon; three brothers: Dale, Harold and Kenneth; and two sisters, Marian and Ruth.