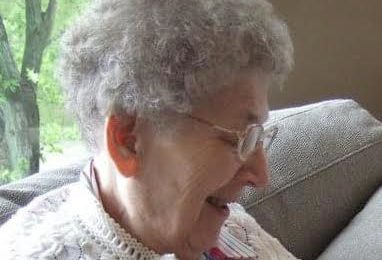 Pearl Adlien Johnson age 94 of Redwood Falls passed away peacefully on Monday, July 26, 2021 at Garnette Gardens in Redwood Falls.  A Memorial Service will be held at 3:00 p.m. Thursday at St. John Lutheran Church in Redwood Falls.  Visitation will be held one hour prior to services at the church.  Interment is in the Redwood Falls Cemetery.  Online condolences may be sent at www.stephensfuneralservice.com. Stephens Funeral Service – Redwood Valley Funeral Home is assisting the family with arrangements.

Pearl was born August 24, 1926 on the family farm in Eden Township near Morgan, MN to Ernest & Martha (Grundemann) Dittbenner.  She was baptized and confirmed in the Lutheran faith. Pearl attended country school in Eden Township, and graduated from Morgan High School in 1944.  Following graduation, she moved to Redwood Falls and worked as a waitress in a local café.  There she met Harry George Johnson.  After Harry was discharged from the US Army after serving in WWII, they were united in marriage December 14, 1946 in the living room, next to the Christmas tree, at Pearl’s family home.  Together they built a house and made their home in Redwood Falls where they remained most of their lives.  Pearl stayed home to raise her family until 1968 when she went to work in retail at Coast to Coast Hardware Store.  There she worked for 21 years, retiring at age 63.  After retiring, Pearl continued working in her impressive vegetable and flower gardens.  She enjoyed canning vegetables and was known for her pickles, and for baking pies and cookies.  Pearl loved to play cards and spend time with her friends and family.  Pearl was looking forward to being reunited with her husband and her son in heaven.