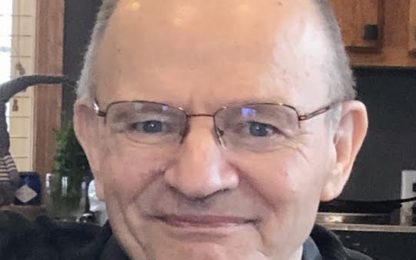 The clergy will be Msgr. Eugene Lozinski. Interment will be at the St. Mary’s Cemetery in Sleepy Eye, with military rites by the Sleepy Eye Honor Guard.

Service can be watched at https://www.facebook.com/stmarysleepyeye/live

Arrangements are with the Sturm Funeral Home in Sleepy Eye, Minnesota. Online condolences may be left for the family at www.sturmfh.com.

Paul Joseph Baechler age 76 of Eden Prairie, MN and formerly of Sleepy Eye, MN died on May 29, 2020 at his home with his daughter Janel, son Jeff and longtime companion Karen by his side. He is survived by his daughter Janel Schliemann (Mark) of Minneapolis, and son Jeff Baechler (Michelle) of Farmington; 5 grandchildren: Christopher, Riley, Devin, Ben and Josephine. Brothers Charles and Robert (Mary Jane). Niece ReNae Wintheiser (Randy) and great nephew Morgan. He was preceded in death by his parents Clarence and Elizabeth and baby brother Thomas.
Paul was born on September 1st, 1943 in Sleepy Eye, MN. He attended St. Mary’s Catholic school where he enjoyed playing baseball and one year (despite not being a singer) sang a solo in the school play. Paul loved to share his memories of playing baseball. He talked about making the top team as a sophomore and at one point being the fastest sprinter on the team. As a young boy, Paul started figuring out ways of making money. First, he started by collecting worms in the rain and selling them to the local fishermen. Next, he was a successful paperboy by signing up the most new subscriptions and earning free trips to the state fair. In addition, he also sold greeting cards to his many clients. Throughout high school and college, Paul worked at the Del Monte plant in Sleepy Eye.
Paul received a bachelor’s degree from MN State University, Mankato. He served 6 years in the Army National Guard. Paul had a career in Accounting at Honeywell for 31 years and finally he retired from FSI as a Divisional Controller.
Paul’s passion was to travel. He had visited 49 out of 50 states (only missing Alaska). The other wonderful places he traveled include Australia, New Zealand, Bermuda, Belize, Canada, Caribbean, most of SE Asia, China, Japan, France, Germany, Netherlands, Italy, Ireland, Scotland, Mexico to name a few. He loved his cars and talked about how he finally bought his “dream convertible” in his mid-20’s. He enjoyed racing his car and stated, “he couldn’t be beat”. However, he did love to give his kids “the business” and embellish stories. Paul loved to play the odds at cards, casinos, racetracks and fantasy football. He enjoyed cheering on his grandchildren at baseball, soccer, hockey, volleyball and basketball. He attended their music concerts and enjoyed competing against them at games during family parties.
At age 73, Paul was diagnosed with prostate cancer. After removal and recovery, off to Hawaii he went enjoying a fantastic vacation, even hiking to the top of Diamond Head. A few months later, he received the fateful news that he had Myelodysplastic Syndromes (MDS), which then progressed into Acute Myeloid Leukemia (AML). Paul fought hard and continued hope that he would overcome this disease. In the end, he had the pleasure of laughing with his children, grandchildren, brother and good friend and even convinced us into giving him his favorite treats. He will be missed immensely. Special thanks to Dr. Erica Warlick, her team and the staff at the University of MN Medical Center.
In lieu of flowers, the family prefers memorial contributions in Paul’s honor to the MDS Foundation at www.mds-foundation.org.