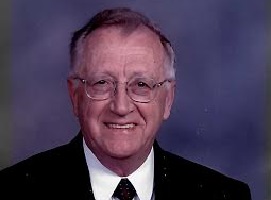 Orville DeLane Wolf, age 89, of Sacred Heart, died Monday, March 29, 2021, at the Granite Falls Care Center.  A private family service will be held at Our Savior’s Lutheran Church in Sacred Heart.  The Vicar Gwen Arneson will officiate.   Burial will be in Our Savior’s Cemetery in Sacred Heart.  Arrangements are with Dirks-Blem Funeral Service, Renville, Minnesota.

A live stream of the service will be available on Thursday, April 1, 2021 at 11 a.m. by clicking on the following link.  https://my.gather.app/remember/orville-wolf

Orville DeLane Wolf was born on March 10, 1932, to Jacob and Magdalena (Fey) Wolf in McIntosh County, North Dakota. He graduated from Kulm, ND High School. He served in the U.S. Army Corps of Engineers for two years during the Korean Conflict.  After his discharge from the military, he attended Ellendale, ND Teachers College, graduating in 1957.  He was united in marriage to Evangeline “Angie” Siegler on November 24, 1955, at the Congregational Church in Kulm.  He received his Master’s Degree from St. Cloud State in 1969.  Orville taught school for 34 years, three of which were in Browns Valley, MN. He and his family moved to Sacred Heart in August of 1960. He retired from teaching in May of 1991, and was then hired for the position of Sacred Heart City Clerk/Treasurer, a position he held until retiring in December of 1996.  He continued to help out on a part-time basis in that position since then.  Orville also was a valued funeral assistant for Dirks Blem Funeral Service for many years. He was a member of Our Savior’s Lutheran Church where he served three terms on the church council.  He was a loyal member of the Sacred Heart Lions Club, with perfect attendance since 1960, and served as secretary/treasurer for many years.  Orville was awarded the Melvin Jones Fellowship Award from the Lion Club, the highest recognition for that club. Orville enjoyed reading, listening to music, gardening, keeping his lawn and vehicles immaculate, and was an avid Minnesota Twins and Viking, and Yankees fan.

He is survived by his wife, Angie, his daughter and sons: Mary (and special friend Chris Fennell) of Sacred Heart, Dennis of Sacred Heart, Don (and Noreen) of Mankato, and David of Minnesota Lake; his two grandchildren Travis (and Heather) Finlayson and Madelyn Wolf; two great granddaughters, Charlotte and Lena Finlayson, and his sister Ermalane (and Curtis) Mogck of Jamestown, ND; and other relatives and friends.  He was preceded in death by his parents, his brothers Calvin and Rodney, and twin infant daughters.