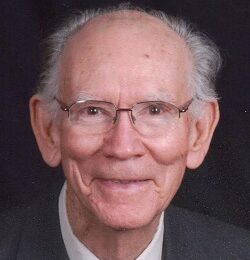 Orville Dean, age 90, of Hector, MN, died Monday, December 13, 2021 at the Olivia Hospital. Funeral services will be Tuesday, December 21st at 1:30 p.m. at First Lutheran Church in Hector with Rev. Amy Karlson officiating. Visitation for Orville is Tuesday at the church from 11:30 a.m. to 1:30 p.m. Burial will be in the Hector City Cemetery. Military rites will be held by the Hector American Legion. Memorials are preferred to Hospice, Salvation Army, Billy Graham Evangelistic Association, and the Disabled American Veterans. Arrangements are with Dirks-Blem Funeral Service of Olivia.

Orville Floyd Dean was born October 13, 1931 in Minneapolis, MN, to Edwin and Lillie (Johnson) Dean. He grew up on a farm south of Hector and attended District #83 country school. Orville graduated from Hector High School in 1949 and then took some agriculture classes at the University of Minnesota. Orville served his country in the U.S. Navy Reserves from 1951-1953 and then was active from 1953-1955 serving on the USS Hickox. Upon his discharge he returned to Hector. In the early years he worked as a plumber building the new Hector school and also helped local carpenters build homes. Orville married Doris Johnson, the love of his life, on March 5, 1960 at First Lutheran Church in Hector and were blessed with three children, Brenda, Larry and Jennifer. Orville enjoyed teaching his children about life on the farm by raising pigs, geese, and chickens. He loved being a farmer and was grateful for each bountiful harvest.  In 1994 they moved into town but he continued to help his son with field work for many years. He enjoyed hunting, fishing, fly-in trips to Canada, and traveling with the family exploring many states and national parks on vacations. Orville felt so close to GOD while enjoying the beauty of creation, and he shared that love of nature with his children and grandchildren. He took his grandkids on many trips to a favorite nature hike he called “Frog Alley” where they would come back with a bucket full of frogs and a bouquet of wildflowers for Grandma. One of his favorite sayings was, “Let’s go exploring!” Sledding, ping pong games, and playing cards were other treasured activities with family and friends. He and Doris always played cribbage or Racko every evening before bed. In later years they enjoyed spending winters in Bullhead City, AZ. Their cabin on Big Kandiyohi Lake was their happy place for several generations and they enjoyed sitting on the deck while watching their grandchildren play in the water. Orville was a talented woodworker and made many crosses and angels to give away. He was an active member of First Lutheran Church where he served others in many ways. A few years ago Orville and Doris moved to Prairie View of Hector, where he enjoyed playing games and visiting with so many of the kind and caring people. Orville will be fondly remembered as a kind and gentle soul who always had time to listen and talk. He was humble and hard-working, and lived out his steadfast faith in GOD by loving GOD above all and cherishing his family and friends.