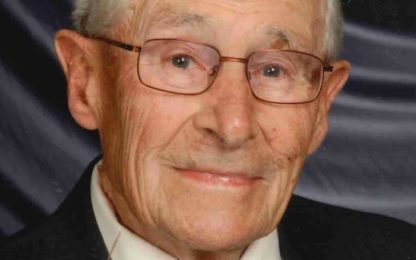 Omer John Jenniges age 95, of Wanda, MN died on May 1, at Seasons Hospice in Redwood Falls.

There will be a private service on Wednesday, May 6, at St. Mathias Catholic Church in Wanda.

If you would like to show your support for the family, you are invited to observe the procession as we drive from St. Mathias Catholic Church through down town Wanda on our way to the cemetery. This procession will take place on Wednesday, May 6, at approximately 11:45 – 12:00 noon. Military Honors will be performed at the Legion Hall in Wanda during the procession. Please use social distancing as standing along the route or stay in your car. Please do not follow the procession to the cemetery.

The clergy will be Father Anthony Hesse. Interment will be at the St. Mathias Catholic Cemetery in Wanda.

Omer John Jenniges was born on June 21, 1924 to Bernard and Rosa (Otte) in Willow Lake Township, north of Wanda, MN. He was baptized and confirmed at St. Mathias Catholic Church where he was a lifetime member, a Eucharistic Minister, lead the rosary before mass and served on the parish council. He received the Bishop’s Medal of Service Award in 1994. Omer attended Wanda Public Schools through 8th grade and earned his honorary high school diploma years later. Drafted in May of 1945, Omer served with the Asiatic Pacific Theater as a P.O. Clerk and then honorable discharged in December of 1946. After his discharge from the Army until 1949, he drove oil bulk truck for Standard Oil and traveled to Grafton, ND to harvest potatoes. Omer farmed north of Lamberton in Waterbury Township. On June 28, 1949, he married Alice Kaufenberg at Our Lady of Victory Church in Lucan. After their retirement from farming in 1989, the couple moved to Wanda. Omer was a charter member of the Legion Post #385 and served as Post Commander for 9 years. He also served as a Redwood County Legion Commander, charter member of the Wanda 333 club, member of the Farmers Union, served on the Lamberton school board for 9 years, and the Wanda Mayor for 12 years. Omer enjoyed gardening, fishing trips with family, making apple pies, hunting, playing cards, bingo, and collecting shot glasses and antiques. He collected aluminum cans and donated thousands of tabs to the Ronald McDonald House. For countless hours, Omer did volunteer driving for Western Community Action and volunteering at Wanda Legion events. Omer resided at Garnette Gardens in Redwood Falls for the past 3 years. Omer liked a good party and enjoyed many birthday and Christmas celebrations.

He is survived by his children – Rozann Rose of Bloomington, Thomas (Marlys) Jenniges of Lamberton, Robert (Debra) Jenniges of Revere, Kevin (Lisa) Jenniges of Walnut Grove, Monica (Christopher) Blegen of Pemberton, Mary (Todd) Evans of Lamberton, and Wendy (Tom) Haley of Rochester; 18 grandchildren; 18 great-grandchildren; and brothers- Yvo Jenniges and Alphonse (Elaine) Jenniges. Omer was preceded in death by his parents, his wife Alice in 2007, and son Rodney Jenniges in 1985; and siblings – Reinhardt, Bernard, Ambrose, Rose Spangler, Dennis, and Adrian.

Omer’s family would like to thank Seasons Hospice and Garnette Gardens for their great care.