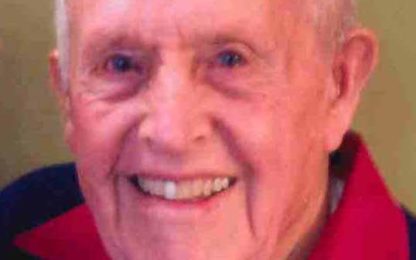 Odin Kenneth Hansen age 95, of rural Sleepy Eye, MN died on March 31, 2020, at Sleepy Eye Care Center in Sleepy Eye where he had made his home the last 21 months.

Private Graveside Service will be held at the Prairieville Cemetery, on Saturday, April 4, 2020.

The clergy will be Pastor Rebecca Krogstad.

A Public Service will be held after the COVID-19 restrictions are lifted.

He was born on July 1, 1924 in Rendsville Township, Stevens County, MN. Odin was the only child of Herbert & Adelia (Sather) Hansen. He is of Norwegian ancestry. Odin was baptized at Kongsvinger Lutheran Church, rural Donnelly, on July 20, 1924. Odin was confirmed as a member of St. Matthew’s Lutheran Church on June 5, 1938 at St. Matthew’s Lutheran Church in Evan where he taught Sunday School and sang in the choir. He served on the church council and was a member of many committees, especially the building and repair groups. Odin started school at District 58, rural Evan in 1930. From 1934 to 1938 he attended District 23, rural St. James. Odin graduated from Sleepy Eye Public on May 28, 1942. Since he was a good singer he became a member of the high school chorus. He played trombone in the school band. He played football and was a charter member of the Sleepy Eye Chapter of the FFA. Odin was a member of the Evan Skyrockets 4-H Club. On June 16, 1949 he married Darlene Olsen. They started farming on the William Dodge Farm in 1949 and lived there until the Spring of 2018. He played baseball on an Evan team. Perhaps his favorite pastime was fishing, he especially enjoyed this time on the “Let’s go Fishing Pontoon” where he shared his love of fishing with other fishing enthusiasts. He also enjoyed hunting, camping and traveling through the United States and Canada in their camper. Odin served on the Prairieville township board from 1975 to 1981. He was treasurer of School District 218 (#58) from 1950 to 1968 when the school closed. Odin was a DeKalb seed salesman from 1970 to 1981. He was hired as the Brown County Agricultural Inspector in 1981 and Ditch Inspector in 1986. Odin retired in 1991.
He is survived by his wife, Darlene, children, Dean (Kathy) Hansen, Charles (Barbara) Hansen, Philip (Christie) Hansen, Eunice Hansen (Mark Olson), 8 grandchildren; Andrew, Katie, Michael, Joseph, Cindy, Erica, Losha and Galina and 7 great grandchildren, Blake, Grayson, Evan, Hadlee, Kinley, McCoy and Maverick. He was preceded in death by his parents and grandson, Matthew.