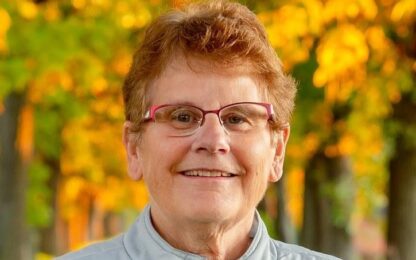 Norma Lee Smith was born on December 9, 1950, in Washington, DC twin daughters to Norman Harned and Polly Bell (Kessinger) Moore.  Norma and her family lived in Arlington, VA until she was nine years old.  She and her family then moved to Boise, Idaho and Norma graduated from Boise High School in 1969.  She continued her education at the University of Northern Colorado, graduating with a B.A. in Elementary Education.  One day on the ski slopes she met a young soldier from Minnesota, Sam Smith, Jr., they began dating. Norma and Sam were united in marriage on December 30, 1974, in Boise.  They moved to Renville and during the Summers Norma taught at the migrant school in Renville.  She also provided daycare during the school years for many families.  After 18 years of daycare, Norma began working at the Bank in Danube and later worked at First Security Bank in Renville, retiring in 2016.  She was a member of Holy Redeemer Catholic Church and Friends of the Arts.  Norma loved to read- especially to her children and grandchildren, traveling with her siblings, and watching and participating in sporting events.  She also loved the outdoors and spent many hours walking, biking, camping, and water and downhill skiing. She was a caring, generous lady and will be missed by all who knew her.

She is survived by her husband Sam, her daughters and son:  Polly (and Jon) Ahrens of Renville, Aren Field(and significant other Mark) of Volga, SD, Joey Smith (and Significant other Bre) of Seward, AK, and Becky (and John) Widmer, of Buckeye, AZ; her 8 grandchildren:  Kate and Will Ahrens, Audrey, Matthew, and Anna Field, Owen Smith, and Roman, and Henry Widmer; her sisters and brother: Susan (and Jack) McKelvy, of Buffalo Creek, CO, Roger Moore of Denver, CO, and her twin Nadine (and Jim) Sinclair of Lakewood, CO; many nieces, nephews, and other relatives and friends.  She was preceded in death by her parents Norman and Polly Moore.