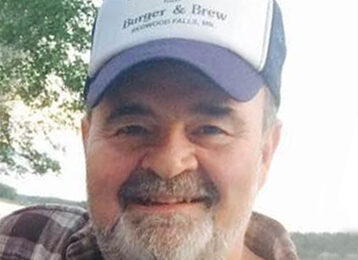 Michael Guy “Chumly” Larsen, age 67 of Redwood Falls, passed away peacefully Saturday, November 6, 2021 surrounded by his family at Carris Health – Rice Memorial Hospital in Willmar.  A Celebration of Life will be held at a later date.  Remembrances may be made to the charity of your choice.  Online condolences may be sent at www.stephensfuneralservice.com. Stephens Funeral Service – Redwood Valley Funeral Home is assisting the family with arrangements.

Michael Guy “Chumly” Larsen was born to Donna (Carity) Larson and Gerald Larsen September 10, 1954 in Redwood Falls, Minnesota.  He was raised by his grandparents, Fred and Ruth Carity at a very young age.   He graduated in 1972 from Lincoln High School in Redwood Falls.  Following this completion he made the decision to sell his green 1969 Camaro, which he raced at Minnesota Dragways. This began his well-known passion for racing in Redwood County.  After the new girl in town, Lori, caught his eye, she later became the love of his life.  While attending Minnesota Business College for accounting, the two married on February 16, 1974 at Gloria Dei Lutheran Church in Redwood Falls.  Together they raised their daughter.  An avid outdoors man, he had an enjoyment for snowmobiling, fishing, and was a skilled hunter at their lake home up north.  He also dedicated time to training dogs of all kinds, two of which Chum owned.  His springers, Dusty and Kessie, were American Kennel Club field trial champions.  Additionally, he raced modifieds for many years.  He, along with his driver Jason Wyffels, took great pride in the Chumly’s Burger and Brew #21 car.  Michael, or “Chum” by all who knew him, was well respected and admired in the community as he was always there for others.  After managing and running multiple night clubs and bars, together he and his wife, along with Harry Thomas, started their own business.  Chumly’s Burger and Brew was established in 1984.  Along the way Ron and Kim Vagle joined them.  After almost four successful decades of Chum running his business they decided to sell it.  Now retired, he spent time at the lake closer to home with his family; including his much loved grandchildren whom he adored.  Chum will be greatly missed by all who knew him.

He is survived by his wife of 47 years and will be forever loved by his best friend and partner through life, Lori.  He is also survived by his daughter Michele Larsen (Shane Kramer); grandchildren: Justene, Duran and Quinn all of Redwood Falls; sister Ruth (Martin) Moreno of St. Paul; half-siblings: Dana (Blake) Canham of St. Paul, Bob (Michelle) Larsen of Oklahoma and Rachel (Brian) Anderson of Hutchinson; and many nieces and nephews. He is preceded in death by his grandparents, Fred and Ruth Carity, mother Donna (Carity) Larson, father Gerald Larsen, and special family friend Jason Wyffels. Blessed be his memory.