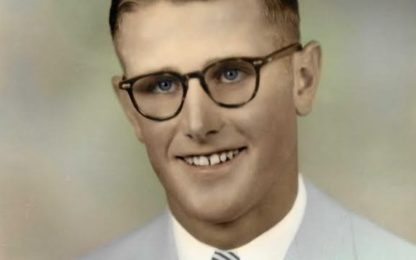 Melvin Link, age 89, of Renville died Tuesday, January 28, at the RenVilla Nursing Home in Renville.  Funeral services will be 2:00 p.m. on Friday, January 31, at Emden Christian Reformed Church in Renville.  The Rev. David Zigterman will officiate.  Burial with military honors will be in Fairview Cemetery in Renville.  Visitation will be Thursday from 5-7 p.m. and will continue on Friday one hour prior to the services at the church in Renville.  Arrangements are with Dirks-Blem Funeral Service, Renville, MN.

Melvin Link was born February 7th, 1930, on the family farm in Rheiderland Township. Melvin was the 5th child of 11 born to Dutch immigrant parents Fred and Hattie (Broersma) Link. He was baptized and professed his faith in the Prinsburg Frist CRC. He attended country school for 8 years and completed 2 years at the Renville High school. He worked on the family farm until he joined the Marine Corps in November 1951. On November 12th, 1951, he was united in marriage to Harriet Ryks in the Emden CRC. Harriet followed him to Camp Matthews in San Diego CA and then to Camp Lejeune in Jacksonville, NC. He then went back to Camp Pendleton, Oceanside CA where he was stationed until his honorable discharge in November 1953. They became parents to a daughter Nelida born on December 26, 1952, in Oceanside CA before moving to San Diego. There he worked in the Convair Aircraft plant. They moved back to MN in the spring. Melvin then went to work for Drys Mulder doing tile work through the summer. The following spring he began work for Duininck Bros. road construction as a blade man. They became parents to a son Jeffrey born on February 25th, 1955. In 1979, Melvin and his son Jeff began M&J Link Construction until 1999, when he retired. Melvin had a gift for building. He built many roads, many homes, but best of all he built many friendships. He enjoyed his retirement years golfing, fishing, and travelling to 11 different countries and most of the US states. Melvin was an avid reader and appreciated the Renville Library. He was a skilled pool player and delighted in challenging family and friends to a game of pool on his table. Many happy memories were made at their various lake places. Fishing became a favorite past time, including trips with fishing buddies. He also greatly enjoyed playing hours of cards and games with family and friends. He later volunteered to play cards with residents at the Renville Nursing Home. He was proud of serving the Renville Ambulance by keeping the ambulance washed.  Melvin entered the Renville Nursing Home as a resident on May 2018, due to the effects of several strokes. He appreciated all the kind, cheerful, and helpful nursing staff. They became like family to him and enriched his remaining years. In December 2019, he was diagnosed with his 2nd bout of cancer. He entered into the loving care of Renville County Hospice on December 26th. Hospice made his last days comfortable and peaceful. On January 28, 2020, at the age of 89 years Melvin left this earthly life and entered into glorious eternity with his Savior free of pain and suffering.

Blessed by his memory.