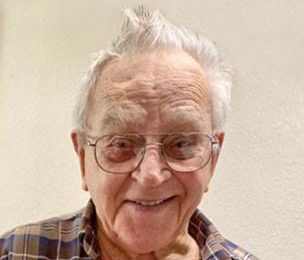 Melvin Lawrence Dunteman, age 93 of Tracy, passed away Tuesday, August 24, 2021 at Prairie View Health Care Center in Tracy.  Memorial Services will be held at 10:00 a.m. Saturday, August 28 at Tracy United Methodist Church with a livestream available at Stephens Funeral Service Facebook Page.  Visitation will be 5:00-7:00 p.m. Friday, August 27 at Tracy Area Funeral Home.  Visitation will continue one hour prior to the service at church on Saturday.  Interment will be in the Amiret Cemetery.  Memorials preferred in lieu of flowers.  Online condolences may be sent at www.stephensfuneralservice.com.  Stephens Funeral Service – Tracy Area Funeral Home is assisting the family with arrangements.

Melvin Lawrence Dunteman was born December 19, 1927 to Christ and Elsie (Sabinske) Dunteman in Tracy, Minnesota.  He was the oldest to five sisters.  Melvin was baptized and confirmed at Tracy Lutheran Church.  He attended Amiret School through eighth grade and later graduated from Tracy High School.  He then joined the U.S. Army from 1948-1949.  He did two tours in the U.S. Army, first tour as a private and second tour as specialist third class.  On his second tour he met the love of his life Dorothy McCulloch.    On December 7, 1955, Melvin was united in marriage to Dorothy Ann McCulloch in Washington DC.  The couple moved back to Minnesota and farmed east of Amiret, where they were raised crops, cattle, geese, and chickens, and they were also beekeepers.  Later, Melvin did cross country trucking and was a Ram Tour Bus Driver.  Melvin wore many hats in the community.  On Sunday mornings, he would deliver newspapers to homes in the rural area.  He volunteered to drive patients to doctor’s appointments and transported lab samples for Avera.  Melvin was also a Sunday school teacher at Amiret United Methodist Church and he belonged to the Tracy American Legion, where he served on the honor guard during funerals.  You could often find Melvin 4-wheeling around the farm and enjoying nature.  Some of his hobbies included gardening, camping, and going hunting.  To pass the time he enjoyed woodworking, reading, playing cards, and doing jigsaw puzzles.  Melvin loved his Sunday drives and spending time with this family.