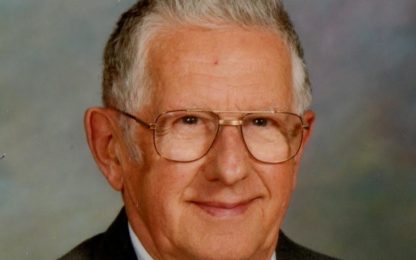 Melvin Archibald Hubbard, age 96 formerly of Tracy, passed away Friday, January 29, 2021 at Ecumen Centennial House in Apple Valley.   Celebration of Life will be held at 2:00 p.m. Saturday, June 26, 2021 at Tracy United Methodist Church.  Interment will be in the Tracy City Cemetery. In lieu of flowers, a memorial contribution in Melvin’s name may be made to the Ecumen Giving Fund (hospice), Apple Valley, Minnesota or to the Tracy United Methodist Church.  Online condolences may be sent at www.stephensfuneralservice.com.  Stephens Funeral Service – Tracy Area Funeral Home is assisting the family with arrangements.

Melvin Hubbard was born July 31, 1924 in Worthington, Minnesota to Archibald and Amanda Hubbard.  He lived in Bigelow, Minnesota before moving to Tracy, Minnesota at age 13.  On May 18, 1943, Melvin was inducted into the United States Army.  He was sent to England and then on to Normandy, France where he landed on July 14, 1944.  He returned to Tracy after his discharge on November 6, 1945 and worked with his father at the Hubbard Appliance Store.  Melvin met Beverly Kassel at the Tracy United Methodist Church and was immediately smitten with her.  They were married on June 18, 1948.  Melvin and Beverly had three children.  In 1960, Hubbard Appliance was sold and Melvin turned to selling insurance and investment products.  He was a social person and loved meeting with his clients and potential customers.  He retired at age 65.  Music was very important to Melvin.  He sang in several quartets and the United Methodist Church choir for 67 years.  Gospel music was his favorite listening music.  Melvin was an avid walker and could be seen walking the streets of Tracy with the companionship of a neighbor’s dog.  He also enjoyed walking with a friend or by himself in the VMC arena.  Melvin moved to Ecumen Centennial House in Apple Valley, Minnesota in October 2019 so he could be close to family.

Melvin was preceded in death by Beverly, his wife of 65 years, his brother, Stanley, and his sister, Marilyn Dowler.  He is survived by his children:  Alan (Bobbie), Debra, and Brian (Jane); and his grandsons:  Matthew (Abby) and Brandon.