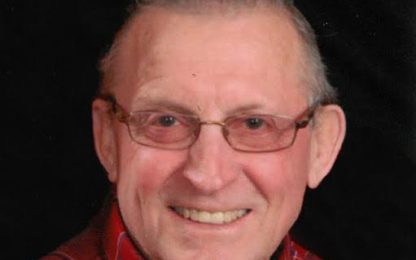 Maurice VanDeWiele, age 85 of Tracy, passed away Thursday, July 29, 2021 at Sanford Tracy Hospital after an extended battle with Alzheimer’s.  Mass of Christian Burial will be held at 10:30 a.m. Tuesday, August 3, 2021 at St. Mary’s Catholic Church in Tracy.  Visitation will be 5:00-7:00 p.m. Monday, August 2 at Tracy Area Funeral Home with a Rosary at 4:45 p.m. and a prayer service at 7:00 p.m.  Visitation will continue one hour prior to the service at church.  Interment will be in the Calvary Catholic Cemetery in Tracy.  In lieu of flowers, memorials are preferred to St. Mary’s Catholic Church or St. Mary’s Catholic Schools or the Alzheimer’s Association.  Online condolences may be sent at www.stephensfuneralservice.com.  Stephens Funeral Service – Tracy Area Funeral Home is assisting the family with arrangements.

Maurice Albert VanDeWiele was born September 27, 1935 to George and Eliza (Maeyaert) VanDeWiele in Redwood County, Minnesota.  He grew up on a farm near Walnut Grove, where he graduated from 8th grade country school.  After graduation, his dad promoted him to the corn planter.   He was the youngest of eight children.  On September 8, 1955, he married the love of his life Judy Polman at St. Michael’s Catholic Church in Milroy.  The couple farmed by Tracy and lived on that same farm for 63 years.  They raised chickens, hogs and cattle.  Maurice worked part time as a machine setup technician for Sell Brothers of Walnut Grove and John Deere of Tracy.  He was also a great carpenter.  Maurice and Judy renewed their wedding vows in Hawaii.  They were lifetime members of St. Mary’s Catholic Church in Tracy.  In 2018, they moved into Tracy and in January of 2019 Maurice moved into Prairie View Nursing Home due to dementia.   Maurice was a member of various committees: Knights of Columbus, St. Mary’s School Board, and Amiret Township Board.  He enjoyed meeting with his coffee group and going to the casino.  Maurice loved to play games with his family, especially Rolle Bolle.  To his family he was known as the best hugger in the world.