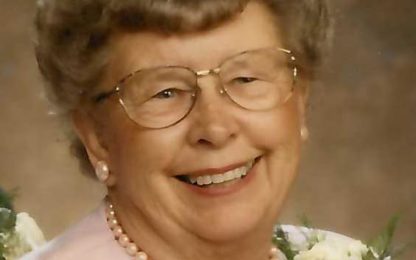 Marvel Gens Hanson, age 92, of Renville, died Wednesday, February 26, 2020, at the RenVilla Nursing Home in Renville.  Funeral services will be 11:00 a.m. Saturday, March 7, 2020, at First Lutheran Church in Renville.  The Rev. Jane Crawford will officiate. Burial will be in Fairview Cemetery in Renville. Visitation will be Saturday one hour prior to the services at the church in Renville.  Arrangements are with Dirks-Blem Funeral Service, Renville, MN.

Marvel Gens Hanson was born on August 18, 1927, on the family farm in Sacred Heart Township, Renville County to Oliver and Marie (Peterson) Olson.  She grew up on the family farm and attended school at District 11 Country School.  As a teen, she moved in with her grandmother so that she could attend high school in Renville, later graduating in 1945.  Marvel then worked in Redwood Falls as a bookkeeper for a couple of years.  She was united in marriage to Gilman Gens on December 15, 1947, at First Lutheran Church in Renville.  They made their home on the Gens’ family farm south of Renville and together Marvel and Gilman farmed and raised their family.  In 1967, Marvel began working at the Renville Star Farmer, working until her retirement in 1977.  Gilman passed away in January of 1995, and Marvel continued to live on the farm until moving to Renville in 1997. She was united in marriage to Carroll “Buster” Hanson on October 10, 1999, at First Lutheran Church in Renville.  They enjoyed their time together until Buster’s death in 2011. Marvel was blessed to have two wonderful men in her life.  She loved to go dancing, play cards and piano, gardening and growing flowers, and cooking and baking.  She also loved to travel, taking many trips with her family and friends. Marvel was known for her heartwarming smile.

Survivors include her children: Diane (Bruce) Heysse of Venice, FL, Bonnie (Jeff) Tweeton of Perham, Brian (Sonia) Gens of Clive, IA, and Dennis Gens of Minnetonka; her stepchildren: Curt (Doris) Hanson of Little Falls, Cathy Shaw of Chaska, and Jamie Hanson of Renville; 11 grandchildren and 10 great-grandchildren; 10 step grandchildren and 19 step great-grandchildren; her brother Jerome (Ione) Olson of St. Cloud, many nieces, nephews, and other relatives and friends.  She was preceded in death by her parent, her two husbands, Gilman and Carroll, her son, Douglas, and her daughter-in-law, Christine.

Mom, we love you with all our hearts.