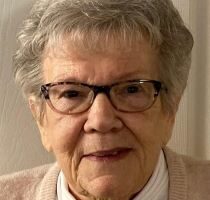 Marlee was born January 19, 1937 in Luverne, MN to Leo and Laura Appel Kennedy.  She graduated from Luverne High School in 1955.  She worked for Northwestern Bell in Luverne and later transferred to the district office in Redwood Falls in 1958, where she met her future husband, Bob Kenney.  They married on September 3, 1960, at St. Catherine’s Catholic Church in Luverne.  Marlee and Bob made their home in Redwood Falls, where they raised their four children: Patti, Julie, Susan, and Paul.

She was a devoted mother and wife. Marlee owned and operated the Sears Catalog Store until its closing in 1993.

Marlee had many interests.  She was an active member of St. Catherine’s Catholic Church, a member of numerous card clubs, and an avid golfer and bowler.  She enjoyed going to plays and musicals.  She also enjoyed spending time with her children, grandchildren, and many friends.