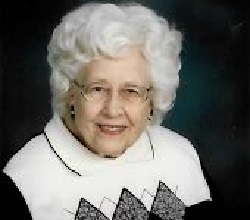 Marie A. Bailey, age 99, of Renville, died Friday, June 19, at the RenVilla Nursing Home in Renville.  A private graveside service will be held in Fairview Cemetery in Renville.  Arrangements are with Dirks-Blem Funeral Service, Renville.

Marie A. Bailey was born on August 19, 1920, in Flora Township, Renville County to Herman and Emma (Neumann) Binger.  She was baptized at St. Matthew’s Lutheran Church in Flora Township and later confirmed at St. John’s Lutheran Church in Renville.  She attended school in Renville and graduated from Renville High School in 1938. She continued her education at St. Cloud Teachers College, graduating in 1940.  She taught school at District 15 North country school.  She was united in marriage to Norman Bailey on June 21, 1941, at St. Matthew’s in Flora Township.  They made their home in Fertile, MN until Norm joined the Coast Guard, he was stationed in San Francisco, and they made their home there.  During this time, Marie worked as an assistant buyer for City of Paris Department Store.  Following the war, they returned to Minnesota and lived in Albert Lea for 28 years. Marie later moved to Morton and lived there until moving to Willmar.  While living in Albert Lea, she was named Mother of the Year by the Albert Lea Lions Club.  Marie was a dedicated mother who worked tirelessly with her two visually handicapped children, teaching them at home and converting school work to Braille. She was instrumental in having the public school system set up a state aid resource room in Albert Lea.  She also worked with ARC Group to start a day program in the state for all handicap children and adults.

She is survived by her extended family.  Marie was preceded in death by her parents, her husband Norman, and her son and daughter Richard and Janet.