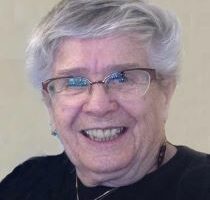 Service will be held at the St. Raphael Catholic Church on Wednesday at 11:00 am.

Marianna Roiger was born on July 18, 1933 to Walter and Lucinda (Hirsch) Frank in New Ulm, MN. She attended St. Raphael’s Catholic School and high school at Good Council Academy in Mankato. She went to Mankato State College and afterwards worked at Midwest Oil in Minneapolis. On September 3, 1956, she and Joseph Roiger were married at St. Raphael’s Catholic and they celebrated 60 years of marriage. Marianna then worked at the Springfield Hospital as an office receptionist, she later worked part time at the Harvestland Fertilizer Office. Marianna and Joe shared the love of going to auctions, collecting antiques and selling their wares at flea markets. They would spend winters in Tuscson, AZ where they made life-long friends who watched over Marianna after Joe’s passing in 2016.  Marianna was an active supporter of the Springfield community and her church. She was a lifetime member of St. Raphael’s Catholic Church and was a member of the CCW. Marianna also served on the hospital auxiliary and St. John Lutheran Home Auxiliary serving for two terms as president.  Marianna had many joys in her life including having late night wine parties with her girlfriends, playing bridge, seeing musicals, tracing her family genealogy, collecting cacti and meeting new people. But doing things for others is what gave her the most joy. Whether it was knitting quilts for special gifts, making Sunday dinners for her neighbor, baking cookies for Springfield library, babysitting for friends, dropping off homemade spaghetti sauce for the dental office, or just helping out a friend in need, Marianna found ways to brighten everyone’s day. It is her kind heart and generosity that will be missed by everyone who knew and loved her.

She is survived by her sister Suzanne (Jack) Renwick of Edina and 6 nieces and 2 nephews. Marianna was preceded in death by her parents, husband in 2016, and sister Barbara (Robert) Mitchell.