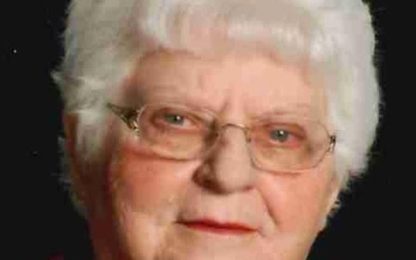 Marian Thiessen passed away Saturday, May 16th 2020 at age 88 of natural causes at the Sleepy Eye Care Center.
A private funeral service for Marian will be officiated by Pastor Nate Luong at her burial in City Cemetery-Mt. Lake, MN Tue, May 19th.
Arrangements by Sturm Funeral Home in Mt Lake, MN.
Memorials preferred to Trinity Lutheran Church, Sleepy Eye, MN.
Condolences may be left at www.sturmfh.com

Marian was born November 14, 1931 to John H. and Marie (Krahn) Duerksen near Delft, MN. She grew up with 2 brothers and 5 sisters. She made a personal commitment to God accepting his gift of salvation in 1943. Marian was a 1949 graduate of Bingham Lake High School and Mankato Commercial College in 1950. Marian and Harold J. Thiessen were united in marriage June 26, 1953-Mt. Lake, MN. They lived in Windom, MN where Marian was a telephone operator. The couple had two children, Mark and Donna. In 1961, the couple moved to Darfur, MN. Marian was a homemaker and book keeper for the Darfur Lumber Co. Over the years, she worked at Tony Downs Foods – Madelia, MN and cashier/Red Owl store- St. James, MN. Marian was a hard worker, enjoyed cooking and baking for family gatherings and was full of hospitality. She always put others’ needs before her own. Marian served as administrative assistant at Comfrey High School and part-time postal worker for many years. Eventually, she was sworn-in as US Postmaster-Darfur, MN. (retired 1992)
Marian appreciated everything good in life. Her hobbies included taking pictures and sharing with family, recording family history and writing letters. She also dedicated herself to teaching Sunday school and shared her talents in many areas at First Mennonite Church – North Butterfield, MN. Marian enjoyed collecting crock jars, oil lamps, old dishes, postage stamps, just to name a few. Marian suffered a serious stroke in 2005, which affected her speech, short-term memory and all her favorite pass times.

Marian and Harold moved to Sleepy Eye, MN Sept 2009, where they became members of Trinity Lutheran Church. While she was able, Marian participated in a quilters group, as a devoted bandage roller.

Marian was a loving wife, mom, grandma sister, cousin, aunt and friend to all who had the privilege to know her. Her memory will live on in our hearts forever.