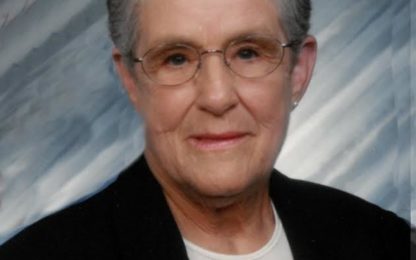 A celebration of life for Marge “Pepper” Schroeder, 86, of Echo, will take place at 2:00 p.m. on Saturday, January 11, 2020, at Sunset Funeral Home in Echo. Visitation will be one hour prior to the service at the funeral home. Burial will take place at a later date.

Marge Elizabeth (Roe) Schroeder was born on December 5, 1933, in Wood Lake, MN, to John and Elizabeth (Backer) Roe. The family moved to Granite Falls when she was a child. Marge attended school in Granite Falls, graduating from Granite Falls High School in 1951. On August 25, 1951, Marge married her sweetheart Dallas Schroeder in Granite Falls. The couple moved to Augusta, Georgia, where Marge was an Army Wife for two years while Dallas was stationed there. In 1953, they moved back to the family farm near Echo, where she spent her entire life. In her younger years she helped with the animals, enjoyed gardening, mowing the lawn, and just being a good stay at home mom. She especially enjoyed their new house, built in 1989, for which she had waited for many years. The couple had two daughters, Debra and Janet.

Marge was known to most people by her nickname, “Pepper,” which she acquired in early childhood (reason unknown, personality maybe?). In her later years, Pepper enjoyed swimming at the Kilowatt Community Center and socializing with her friends from Granite Falls. She loved baking cookies, her flowers, and country music, especially the Oak Ridge Boys and Alan Jackson. Never one to be at a loss for words, Pepper’s greatest joy in life came from visiting with her family and friends. Her infectious laughter and positive attitude were an inspiration to us all.

Marge passed away at her home on Tuesday, December 31, 2019, at the age of 86 years and 26 days. She is survived by her husband Dallas of 68 years; girls Debra Schroeder (and Gail Pederson) and Janet (and Steve) Raddatz; brother James (and Evon) Roe; sister-in-law Laurel Edenburn; and many nieces, nephews, and friends, as well as her cat Sweety. She was preceded in death by her parents, siblings Joy (and Art) Green, Jack (and Florence) Roe, Roy (and Bernice) Roe, Marilyn (and Linn) Averill, and brother-in-law David Edenburn.