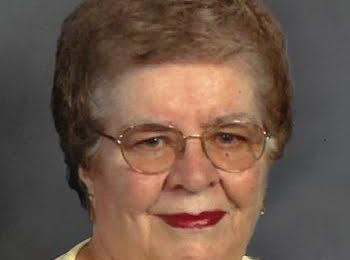 Marcella “Sally” Joan Mathiowetz was born April 8, 1936 to Edwin and Elvera (Starken) Harnack in Tracy, Minnesota.  She was baptized April 19, 1936 and later confirmed at St. Joseph Catholic Church in Lamberton.  Sally graduated from Lamberton High School and then began her nursing career at Redwood Falls Hospital for several years.  On October 11, 1958, Sally married Linus Mathiowetz at St. Joseph Catholic Church. Sally stayed home to raise her family and help with the farm, west of Wabasso. She returned to nursing in the 80’s at the Wabasso Nursing Home, where she worked for 37 years until her retirement.  Sally was a longtime member of St. Anne’s Catholic Church in Wabasso.  She was involved in Christian Mothers and Women’s Circle at St. Anne’s.  Sally enjoyed helping around the farm, she helped raise the chickens, ducks, and geese. You could often find her in the garden, tending to her flowers and vegetables.  She also enjoyed canning, collecting cookbooks, sewing and reading.  Sally loved playing cards, doing puzzles, and spending time with her family, especially her grandchildren.