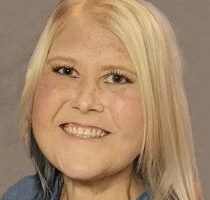 Service will be held at the United Methodist Church on Friday at 10:30 am.

The clergy will be Pastor Cathy Hoffbeck.

Mallory Dawn Friedley was born on August 14, 1991, to David and Marchele (Walz) Friedley in Thief River Falls. She graduated from Red Rock Central High School in 2009 and attended Ridgewater College in Willmar. Mallory worked a variety of jobs ranging from dishwasher, bartender, direct support professional, and memory care aide. She loved to take care of everyone, and it shined through in her work. Mallory and Donavon were inseparable when they were growing up playing catch, riding bikes, and watching cartoons especially Rugrats and Power Rangers. After spending time with her brother and being at daycare with all boys, she claimed at 4 years old that she was a boy. Many arguments were fought between Mallory and Donavon when she told stories that started with “When I was a boy” and he would reply “You were never a boy!”  Mallory met her forever love Jason Christianson while working in Willmar. Their love for each other was beautiful and was evident in their home they shared. They enjoyed gardening together and she enjoyed canning what they grew. This year she found new canning ideas including juices, nacho cheese and coleslaw. It brought her great relaxation. She loved spending time with Jason and was willing to learn whatever sport or activity that would give them more time together. Mallory found she loved ice fishing, and they went often. She was not fond that he cleaned them in the laundry room though. Jason and Mallory also enjoyed going to the Minnesota Wild games the day after Thanksgiving. Watching sports on tv was not Mallory’s favorite and she fought with Donavon about watching the Vikings every Sunday, but happily watched the games with Jason. Mallory had a great faith in God and was proud to express her devotion. She enjoyed being the Lamberton United Methodist Church “card lady”, sending cards to people to make them smile. Mallory was diagnosed with Guillain-Barre Syndrome in April 2019, a condition in which the immune system attacks the nerves. She had to relearn everything we take for granted from standing, walking, dressing, but she did it with a smile, faith, and gratitude. She stated that “Being angry wouldn’t make it any easier.” This past spring Mallory bought an electric scooter and enjoyed going places all over town. One particular day she put on 13 miles. People loved seeing her smile, wave and happy “hello”. Mallory’s famous words when she called her mom were “Hi mom, just a quick question.” The conversation would go on for 30 minutes and sometimes another conversation later on.

In Heaven to greet Mallory was her grandpa – Dennis Walz; great grandparents – Glen and Lorraine Pieske; and other relatives including aunt Kristine Walz.