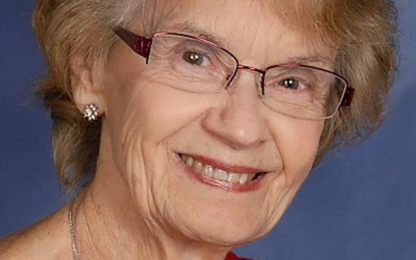 Louise Schlegel, age 90, went to be with her Savior on August 2nd, 2021 at Carris Health-Rice Memorial Hospital in Willmar, MN. Funeral Services will be held on Thursday, August 12th at 10:00 a.m. at Willmar Assembly of God Church in Willmar with Pastor Keith Kerstetter officiating. Visitation will be on Wednesday, August 11th from 5 to 7 p.m., and one hour prior to the funeral services all to be held at the church. Burial will be in the Olivia Cemetery after the service.  Arrangements are with Dirks-Blem Funeral Service of Olivia.

Louise Ann Schlegel was born on July 21st, 1931 in Fremont, Ohio to Robert and Anna (Hammer) Messinger. She was baptized as an infant at St. John’s Lutheran Church in Fremont, Ohio and later as an adult at Willmar Assembly of God. She was a member of the Debutante Club and graduated from Ross Senior High School, Fremont in 1949. Her classmates remained lifelong friends.

Louise was united in marriage to Haldon Schlegel on June 26, 1950 at St. John’s Lutheran Church in Fremont, Ohio. After beginning their family, Louise and Haldon moved to a farm located in Lake Lillian Township in 1957. This home held the memories of 71 years of marriage and raising 5 children, as well as wonderful pets. Louise was a wonderful homemaker and enjoyed preparing meals for anyone who may need a bite to eat. She loved attending Bible studies in the Willmar and Olivia area and being an active member at Willmar Assembly of God. Louise would spend her day running the home and worshipping the Lord.