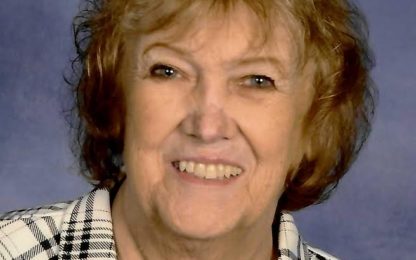 LouAnn Renae Decknatel was born on September 30, 1944, in Litchfield, Minnesota to CJ and Ruth (Holmgren) Speets. She grew up near Atwater and attended school at District 38 Country School. She later graduated from Atwater High School in 1962.  LouAnn moved to Hutchinson where she worked at 3M.  She was united in marriage to James Ronald Decknatel on August 24, 1963.  Shortly after their marriage, they moved to Renville.  LouAnn worked for a short time at Warner Manufacturing in Sacred Heart and then for five years at Control Data in Redwood Falls.  For 30 years she worked as payroll manager for the Renville County West School District.  After her retirement, she worked part time for the District as a van driver.  During her years working at RCW she was the assistant wrestling coach for 2 years and assistant volleyball coach for 17 years.  She was also part of the team that did harassment complaint investigations for the District.  In the mid 1970’s LouAnn was one of the first 5 women to join the Renville Ambulance crew.  During the 7 years she served on the ambulance she became a CPR instructor.  She, along with two others, taught CPR classes at school and in the community. She also did testing of other EMT’s for the State Department of Health.   In 1963, she became a member of First Lutheran Church in Renville.  She served as Sunday school teacher, sub teacher, altar guild, decorated bulletin boards, and served on the banner, stewardship, and church directory committees.  LouAnn was a den mother for the Renville Cub Scout Troop.  She, along with her daughter Teri, were co-chairs of the Judges Committee for the first several Renville Jr. Miss programs.  In 2002, she became the Program Chairperson and was honored as the 2003 Outstanding Chairperson in the state.  In 2002, LouAnn did a nationwide TV commercial for Parker Hughes Cancer Center.  In 2004, LouAnn and Teri were speakers for the Renville County Relay for Life.  In 2008, she became secretary for the Renville American Legion Auxiliary, and also in 2008 she was elected as Financial Director of the Renville County Thrivent Financial Board.  In 2010, she became a volunteer for the Renville County Santa’s Closet.  LouAnn enjoyed camping, traveling, and playing Bingo, but her greatest joy was spending time with her family. She was a devote wife, mother, grandmother, and friend.

She is survived by her husband Jim, her sons and daughter:  Thomas (and Wendy) Decknatel of Sacred Heart, Steve (and Patty) Decknatel of South Haven, and Teri (and Gary) Seehusen of Renville; her seven grandchildren:  Ryan  Decknatel, Ashley Srp, Noah Decknatel, Katie, Decknatel, Austin Decknatel, Amanda Seehusen, and Anessa Seehusen; her great granddaughter Mia Mata; her mother Ruth Speets of Atwater, her brother and sister: Randy (and Donna) Speets of Atwater, and Tami Speets of Washington; several nieces, nephews, and other relatives and friends.  She was preceded in death by her father and grandparents.