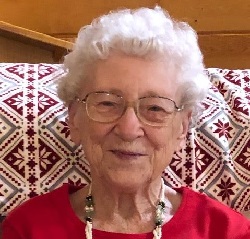 Lorraine Karnik, age 92, of Hutchinson and formerly of Bird Island died peacefully on Tuesday, February 15, 2022, at Prairie Senior Cottages in Hutchinson. Mass of Christian Burial will be Monday, February 21, at 1:15 p.m. at St. Mary’s Catholic Church in Bird Island with the Rev. Joe Steinbeisser as celebrant. Burial will be at the church cemetery. Visitation will be Monday prior to the service from 12:00 noon to 1:15 p.m. Arrangements are by Dirks-Blem Funeral Service of Olivia.

Lorraine Mary Karnik was born on December 19, 1929, to James and Mary (Houdek) Kodet in Olivia.  She went to school and graduated from the Olivia High School. Lorraine married Lawrence Karnik on June 6, 1951, at The Church of St. Mary’s in Bechyn, Minnesota, and enjoyed 66 years of marriage.  They began their married life on the family farm in Bird Island prior to moving into town. Their marriage was blessed with four daughters. Lorraine worked at Renville County Hospital.  She later became a daycare provider. Throughout it all she enjoyed being a homemaker. Lorraine enjoyed gardening, playing cards, dancing, listening to old time music, spending time with family and friends, and always willing to give a helping hand to anyone needing it.  Her greatest joy was spending time with her grandchildren and great-grandchildren whom she taught gardening, baking, playing cards, and cross stitching.