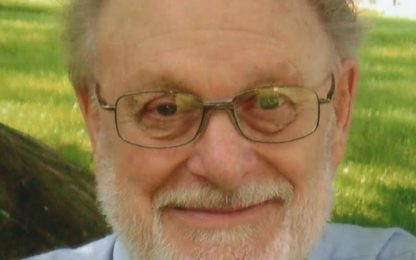 Loren Leslie Jacobsen, age 88 of Redwood  Falls, passed away Tuesday, January 28, at his home.  Funeral Services will be 10:30 a.m. Friday, January 31 at Christ’s Victory Lutheran Church in Redwood Falls. Visitation will be 4:00-7:00 p.m. Thursday at the Redwood Valley Funeral Home and will continue one hour prior to the service at church on Friday.  Burial will be in the Redwood Falls Cemetery.  Online condolences may be sent at www.stephensfuneralservice.com.  Stephens Funeral Service – Redwood Valley Funeral Home is assisting the family with arrangements.

Loren Leslie Jacobsen was born June 27, 1931 to Gilbert & Irene (Zamzow) Jacobsen of Clements, Minnesota in the home that was his Grandmother’s.  The oldest of eight, he grew up in Clements with five brothers & two sisters; the son of a building contractor & homemaker.  He & brothers Rollie & Vernie would play in the street, splashing in the water after it rained… so often that neighbors nicknamed them the three little sailors.  He attended school in Clements through eighth grade, & graduated from Springfield High School.  He especially liked playing football, & spoke well of his time learning in the high school workshops.  Following graduation, he enlisted in the United States Navy, eventually serving on several different aircraft carriers including the Shangri-La & the Antietam.  Aboard these Navy vessels, he operated the arrestor wires that caught the aircraft tail-hook as it landed on deck.  Loren very much enjoyed sharing the stories from his years of service, which ended with an honorable discharge in June of 1955.  Upon returning home, Loren worked for his Dad’s construction business.  He relocated to the Twin Cities to work for contractors there for a few years.  It was at that time he started his own business as a full service building contractor.  Through the years he built homes & apartment houses in Savage & other Twin City suburbs.  He married Marlys Arvidson & they had a daughter Carrie Jean in 1963.  He decided to build apartment houses in Springfield, Sleepy Eye, Redwood Falls, & New Ulm; often living in them during & after each project.  He owned & managed these properties for many years, selling the last one only recently.  When Loren wasn’t putting up buildings, he found time to go fishing in Canada with friends.  To Loren, “If it wasn’t a Walleye, it wasn’t a fish!”  While living in the Sleepy Eye building, one of his tenants would become his mother-in-law in 1986 when he married Janice E. Petersen.  The two of them settled in Redwood Falls & spent many years traveling around the world, seeing Australia, New Zealand, much of Europe, Canada, & the United Kingdom.  Another favorite destination for Loren & Jan was Cancun, going there almost every year.  Having married into a farming family, Loren decided that farming looked like a lot of fun.  At first, he was content to help out when the family needed help, but soon he was ready for more.  Not content to be a spectator, Loren ventured into farming along Highway 68, growing corn, beans, & sugar beets.  In later years he turned over that farm to the family to run, but still helped with harvest for many years to follow.  His favorite task was topping sugar beets, spending hundreds of hours in his favorite John Deere tractor.  When he was a young man, he had done the same task by hand with a beet knife.  If you knew Loren, you knew that when he believed in something, he would not just speak well of it, he would invest in it.  And so he farmed.  He also felt strongly about grandchildren & their education, so much that he invested in the bonds to expand the Jackson County Central School, & also attended the kids’ graduation parties with a generous gift to further their schooling.  He was also a faithful charter member of Christ’s Victory Lutheran Church, as he strongly believed in its mission.  He & Jan rarely missed a Sunday!

Blessed be the memories we share with Loren Jacobsen.