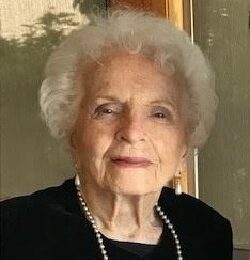 Lody Jane Johnson, age 94, of Sacred Heart, died Monday, October 25, 2021, at the Clara City Care Center Memory Unit.  Funeral services will be held on Saturday, October 30, 2021, at 11:00 a.m. at Unity Christian Reformed Church in Prinsburg, Minnesota.  A livestream of the service for Lody can be seen at https://youtu.be/-Rno0VyV_vE. The Rev. Steve Zwart will officiate.  Burial will be in First English Cemetery in Sacred Heart.  Visitation will be Friday from 5-7 p.m. and will continue on Saturday one hour prior to the services at the church in Prinsburg.  Arrangements are with Dirks-Blem Funeral Service, Renville, MN.

Lody Jane Johnson was born on November 23, 1926, to V.L. and Marion (Stensvad) Symes on the river bottom farm 7 miles south of Sacred Heart.  She was baptized in First English Lutheran Church in Sacred Heart and later confirmed at Our Savior’s Lutheran Church in Sacred Heart.  She went to country school at District 14 south of Sacred Heart and later graduated from Sacred Heart High School in 1945.  On November 8, 1946, she was united in marriage to Melvin Johnson from rural Sacred Heart.  Four children were born to this union:  Rebecca Sue, James Robert, Louise Christine, and Lisa Catherine.  Melvin died in 1987 at the age of 73 years.  Lody later married Harold Stensvad of Melstone, MT in 1991, he died in 2003, at the age of 90 years.

Lody is survived by her daughters and son:  Rebecca Rustad of Willmar, James (and Pat) Johnson of Sacred Heart, Louise (and Richard) Grove of Spicer, and Lisa (and David) Anderson of St. Cloud; 11 grandchildren, 26 great grandchildren, and 5 great-great grandchildren; her sister Susan Larsen of Redwood Falls, and her brother Larry (and Judy) Symes of Norman, OK, many nieces, nephews, and other relatives and friends.  She was preceded in death by her parents, her brother Robert who was killed in Okinawa during WWII, her two husbands Melvin and Harold, and her sister Merle Aaker