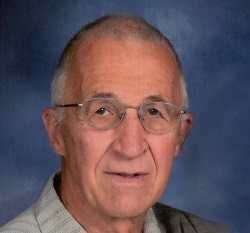 Lloyd Raymond Turbes, age 79 of Wabasso, passed away Thursday, January 6, 2022 at his home in Wabasso while surrounded by family.  Mass of Christian Burial will be held at 10:30 a.m. Monday, January 10, 2022 at Our Lady of Victory Catholic Church in Lucan.  Visitation will be 4:00-7:00 p.m. Sunday, January 9 at the church with a parish prayer service at 4:00 p.m.  Visitation will continue one hour prior to the service at church on Monday.  Interment will be in the Our Lady of Victory Catholic cemetery.  Online condolences may be sent at www.stephensfuneralservice.com. Stephens Funeral Service – Redwood Valley Funeral Home is assisting the family with arrangements.

Lloyd Raymond Turbes was born May 13, 1942 to Raymond and Marie (Hornick) Turbes in St. John’s Hospital in Springfield, Minnesota.  He was baptized May 24, 1942, took his Holy Communion on May 20, 1951, and was later confirmed July 6, 1955 at Our Lady of Victory Catholic Church in Lucan.  He graduated from Wabasso High School.  Lloyd was introduced to Linda Welu through mutual friends and it was love at first sight.  On March 12, 1966, they were united in marriage at St. Michael’s Catholic Church in Milroy.  Together the couple made their home on Lloyd’s family farm near Lucan.  From a young age, he began milking cows by hand. He was a selfless caregiver; from taking care of the farm and animals, to caring for his wife and parents, as well as the neighborhood daycare children. Lloyd was a lifetime member of Our Lady of Victory Catholic church.  He enjoyed simplicity in life, never complained, and never used a swear word.  Lloyd was a gentle, kind person who worked hard on the farm.  He enjoyed bowling, going for walks, bike rides and traveling with his friends.  He loved attending his grandsons’ activities and his family was of utmost importance to him.

Lloyd is survived by his son Jeff (Audrey nee Mahal) Turbes of Wabasso; grandsons: Andrew of Willmar, Michael of Hutchinson and Zachary of Wabasso; siblings: Gary (Jan) of Sioux City, IA, Lyle (Doris) of New Ulm, Linda (Gary) Probst, Irene Bill both of Redwood Falls, Dennis (Darlene) of La Mesa, CA, Carol (Brian) Eberhard of Watkins, CO; Jane Turbes of Englewood, CO; and many other relatives and friends. He is preceded in death by his parents, wife Linda, and son David.