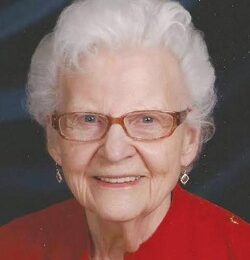 Visitation will be on Friday, December 3, 2021, from 4:00 pm to 7:00 pm at the Sturm Funeral Home, Lamberton Chapel and will continue on Saturday from 9:30 am until 10:30 am at the United Methodist Church in Lamberton.

Service will be held at the United Methodist Church on Saturday at 10:30 am.

The clergy will be Pastor Cathy Hoffbeck. Inurnment will be at the Lamberton Cemetery at a later date.

Lillian “Lil” Julia Severson was born in Lamberton to Sevie Andrew and Anna (Olson) Severson on July 7, 1923, the eleventh of twelve children. She attended school in Lamberton. On August 12, 1940 Lil married Elmer Schultz in Spirit Lake, Iowa, They had five children, Diana, Shari, Jacalyn, Dave and Scott. Elmer and Lil made their home in Lamberton where Elmer worked at Olson Hardware until starting the Lamberton Heating and Plumbing business where Lil worked several years as the secretary. In 1959 they purchased the Lamberton Speedwash, which kept Lil busy doing drycleaning and taking care of the business. She and Elmer enjoyed taking trips to many countries and had been to almost every state in the United States, with several trips to Mexico to visit their grandson, Kerry, at his mission there. Lil was extremely proud of her Norwegian heritage and everyone knew it. She was a life member of Sons of Norway. One of her most treasured trips was going to Stavanger, Norway where her parents immigrated from. She was known for always having an angel pin on her shoulder. She was a long-time member of the Order of Eastern Star and a member of the Lamberton United Methodist Church. Lil lived in her own home, drove her own car, and made her famous carmel rolls until July of 2020 when she entered Valley View Manor Nursing Home in Lamberton due to declining health at the age of 97.