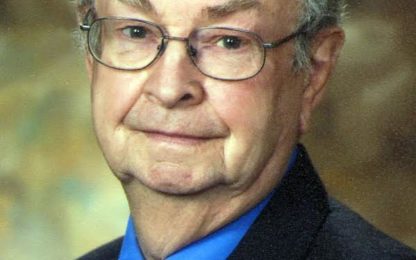 Lawrence Thomas Amberg, passed away with his wife by his side at Fairview Place in Olivia, MN, on Wednesday January 29, 2020, after a brief battle with cancer.  Visitation will be at Dirks-Blem Funeral Home in Olivia on Friday, February 7th from 4:00 – 6:30 pm concluding with a K.C. rosary and prayer service at 6:30 pm. Visitation will continue at St. Mary’s Church in Bird Island from 9:30-10:30 am followed by the mass at 10:30 am on Saturday, February 8th which, coincidentally, is his birthday.  He would have been 84.  This will truly be a celebration of life, including one of Larry’s favorite things in life…cake.  Larry will be buried in the family plot in St. Mary’s Cemetery in Bird Island. In lieu of flowers the family requests memorials be made to St. Mary’s School.

Lawrence (Larry) was born February 8th, 1936 to Sebastian Hubert Amberg and Gladys Agnes (Kelly) Amberg.  He attended St. Mary’s School in Bird Island, MN until leaving his sophomore year to help with the family farm operation following the death of his mother.  He served in the National Guard for six years during which he was united in marriage to Orene Marie Serbus on Aug 29th, 1959 at St. Mary’s Church in Bechyn, MN.  They made their home on the Amberg Family Farm where Larry grew up, south of Bird Island.  Larry and Orene were blessed with five children.  During their 60 years together they traveled extensively, loving to meet people from all over the world and making new friends everywhere they went.  In 2008 he and Orene moved into Bird Island to begin the adventure of ‘city living’.  He continued farming until 2010.  Through the years he was active on the Renville County Farm Bureau Board as well as in Knights of Columbus Council #2000 where he held positions of Grand Knight and Navigator. He was a lifelong member of St. Mary’s Catholic Church in Bird Island where he had served as an usher and on the financial committee. When Larry turned 65 he didn’t retire as one would expect.  Instead, he went out and got his first job.  He was hired by the MN Corn Growers Association as a Regional Representative where he educated, promoted, and recruited members on the benefits of corn and its use of ethanol. This allowed him to do what he loved most: travel around MN talking and socializing with farmers.  He was active in both the National Corn Growers Association and the MN Soybean Growers Association.  Larry received numerous awards and recognitions from these organizations, as it was easy for him to participate in activities that he was passionate about.  Larry loved to be a part of all things Renville County and could be seen at just about every fish fry, sausage supper, farm event, and community activity.  He also enjoyed spending time hunting, talking about farming and was an avid reader.  His other loves were John Deere and Ford- there were no other options! The most important to him, though (even above farming) was family.  It was his greatest joy to have his family around.  Being the story-teller that he was, he was definitely the family historian sharing excerpts from many generations back with all.

Larry is survived by his wife of 60 years Orene Amberg of Olivia, MN; daughter Pamela and her husband Henry Leach of Bird Island, MN; Joseph Amberg, of Chanhassen, MN; Thomas Amberg and his wife Valerie of Willmar, MN; Mark Amberg and his wife Andrea of Alexandria, VA; and Peter Amberg and his wife Tara of Bird Island, MN.  He is survived by 10 Grandchildren:  William, Nicholas, Melanie, Stephanie, Brenden, Drew, Tucker, Gage, Nathan, and Derek; and by 9 Great Grandchildren as well as all three of his siblings: Marilyn (Neil) Hammer, Alice “Patty” West and Ken (Joan) Amberg and seven nieces and nephews.  He was preceded in death by his parents Sebastian and Gladys, newborn twin sisters, and his father and mother in-law, Edward and Estella Serbus.   Blessed be his memory.