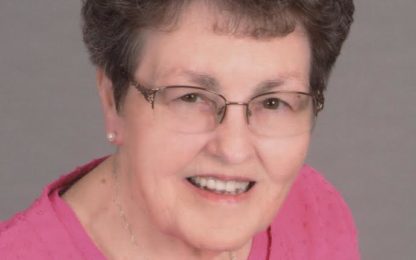 LaVonne Henjum, age 78, of Olivia, died January 4, at RenVilla Nursing Home in Renville. Mass of Christian Burial will be Wednesday, January 8, at 11:00 a.m. at St. Aloysius Catholic Church in Olivia, with Father Joe Steinbeisser as celebrant. Visitation will be from 5-7 p.m. on Tuesday, January 7th at Dirks-Blem Funeral Home in Olivia. Visitation will continue on Wednesday at the church for one hour prior to the service.

LaVonne Mary Henjum was born March 30, 1941 to Carl and Mary (Karnik) Rosenberg on a farm south of Olivia. She grew up in Olivia and graduated from Olivia High School. After graduation she moved to Minneapolis and worked as an insurance agent. LaVonne was united in marriage to Alvin Henjum on September 21, 1968 at St. Mary’s Catholic Church in Bird Island. Their marriage was blessed with two children and they made their in Mound, MN. They moved to Olivia in 1975 where she worked at Schulte’s Insurance Agency and Porath-Kubesh Insurance Agency. She then joined Al as secretary and treasurer for the family auto parts business for many years until retiring. Later LaVonne found a new calling working for Compassionate Care in Willmar doing home care. She then switched to the night shift at Compassionate Cottage in Willmar, retiring from there due to health issues. She was a member of St. Aloysius Catholic Church and the CCW. LaVonne loved crafting and made many wedding photo albums for people. Collecting Beanie Babies and Holiday Barbie Dolls was a hobby of hers.   LaVonne and Al enjoyed attending grandchildren events and time spent traveling together. Besides several trips to visit Branson, MO they also went to Texas for several months these past 16 years.