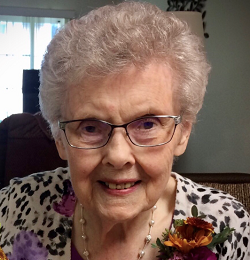 Lavonne Marie Forbrook was born to Leo and Florence (Scanlon) Kenney in Redwood Falls on October 1, 1925. She graduated from Redwood Area High School in 1943. Lavonne worked at Dekalb, as a secretary until marrying Willmar. On November 6, 1947 she married Willmar William Forbrook, at St. Catherine’s Catholic Church, where she was a member. Together they moved to Franklin to raise their family of 7 children. Lavonne later worked as the secretary at the Cedar Mountain Elementary School in Franklin, for many years. In November of 2013, Lavonne moved to Garnette Gardens in Redwood Falls.

Lavonne was a member the church of Sacred Heart in Franklin, and belonged to the CCW, until they closed. After the closing of the church, she became a member of St. Catherine’s Catholic Church in Redwood Falls. She was an active member of the Bridge Club for over 50 years and the Civic Club in Franklin. Lavonne also enjoyed quilting, playing card games, especially Bridge, cooking, entertaining, and spending time with family and friends.

Lavonne is preceded in death by her husband, Willmar, parents Leo and Florence Kenney, her 2 brothers and 2 sisters.